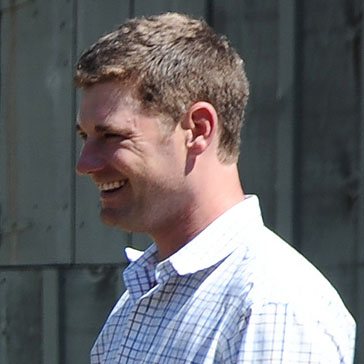 Kent Sweezey grew up on historic Darby Dan Farm in Lexington, Kentucky, where his father served as general manager and Sweezey learned the ropes of farm work. He pursued opportunities abroad to widen the scope of his equine eduction, first at the Irish National Stud, followed by New Zealand’s Windsor Park Stud and Australia’s Arrowfield Stud. He returned to the states and his parents’ new venture – Timber Town Stable. That proved to be a launching pad to a racetrack environment. Sweezey joined trainer Christophe Clement in Florida before heading west to as Eoin Harty’s assistant in California.

Centennial Farms came to know Sweezey when he joined the Jimmy Jerkens barn in 2014. During that time, he played a crucial role in the management and development of our horses, including Wicked Strong, Unified, Preservationist, and Rocketry. He struck out on his own in 2017 and picked up his first graded stakes victory in 2020 with Phat Man. When we needed a trainer for our Florida-based turf horses during the winter, he was a natural fit.