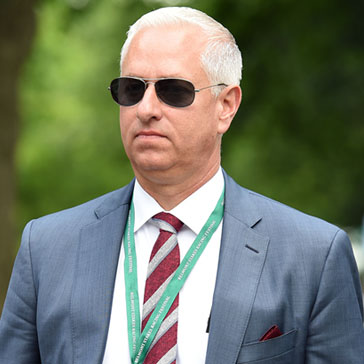 Todd Pletcher grew up in racing, working for his father, Jake, who trained quarter horses and thoroughbreds. The younger Pletcher started as a hotwalker at the age of seven and was grooming horses by the time he was in high school. He attended the University of Arizona’s Race Track Industry Program, earning a Bachelor of Science, while working for Hall of Famers Charlie Whittingham and D. Wayne Lukas during the summers. Upon graduation, he took up a full-time position with the latter, with whom he’d remain until he’d take out his trainer’s license at the end of 1995.

Since striking out on his own, Pletcher has established himself firmly as one of the greatest trainers of all time. He joined his mentors in the National Museum of Racing and Hall of Fame in 2021, his first year of eligibility. His accomplishments include a dozen Eclipse Award winners, seven Champion Trainer trophies, two Kentucky Derby victories, fourteen Saratoga titles, and eleven Breeders’ Cup victories.