Two sales, four phenomenal individuals, each sporting tremendous pedigrees and unlimited potential. The Centennial Farms Acquisition Team combed through Fasig-Tipton’s Selected Yearling Showcase and the elite book one of Keeneland’s September Yearling Sale to assemble a group of can’t-miss prospects. The quartet represents some of the most exciting sires on the planet, bringing together established and young for a diverse selection. These four colts boast outstanding female families that make them irresistable stallion prospects when paired with racetrack performance. 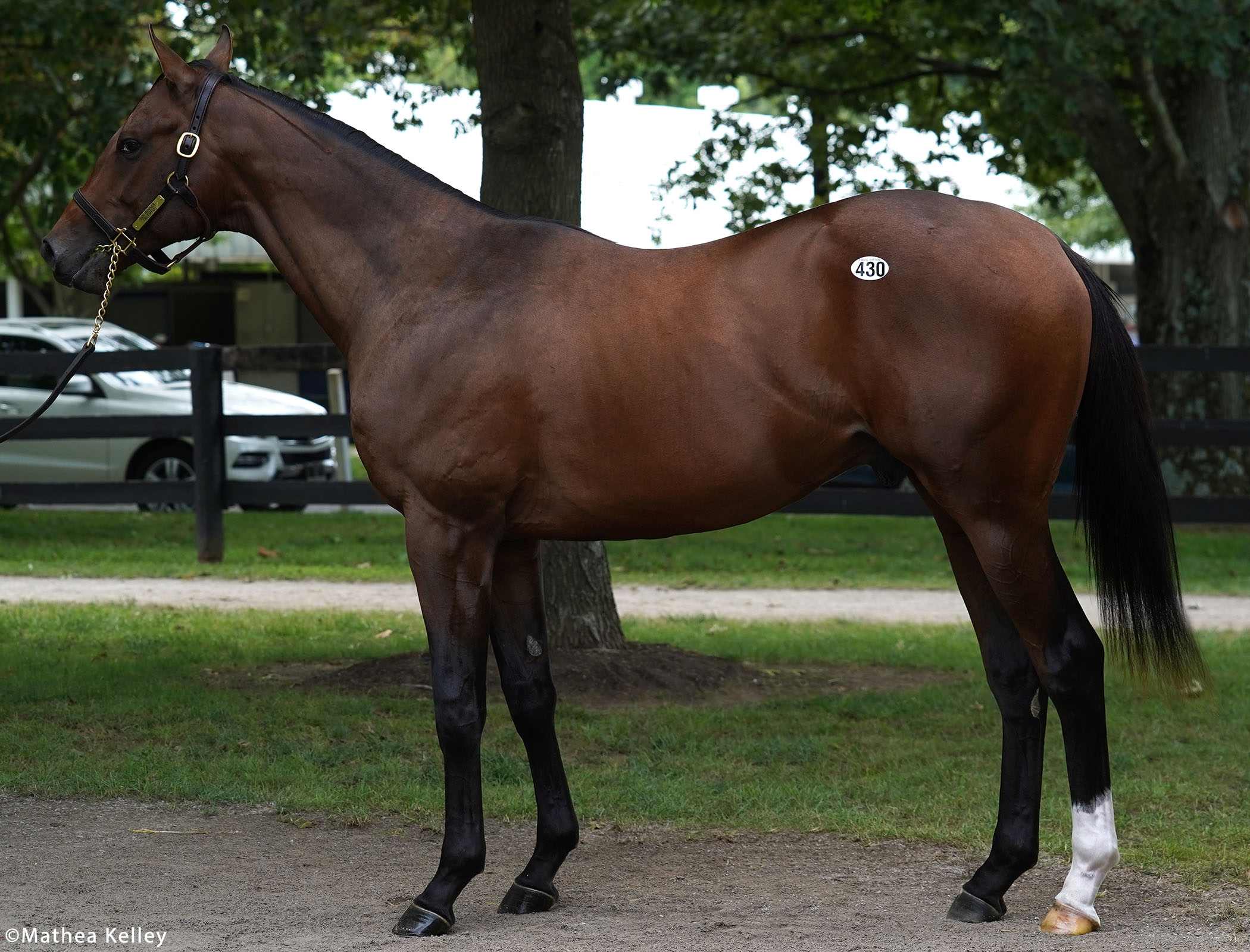 As talented as he was tough, Gun Runner was a remarkable racehorse. Horse of the Year for 2017, Gun Runner captured six grade one events, including the Breeders’ Cup Classic (G1) and Pegasus World Cup (G1), by a total of 30-lengths while defeating notables like Arrogate, Collected, and West Coast.

Gun Runner has a pedigree to match his performance, as he’s by undefeated champion and leading sire Candy Ride (ARG), who already has a standout stallion son in Twirling Candy, and out of a graded winning half-sister to Horse of the Year Saint Liam.

Gun Runner’s first crop, yearlings of 2020, have understandably been in strong demand, and this colt is from a famous family that goes back to a sister of none other than Man o’ War.

He is the first foal from his dam, Truthful, a half-sister to the multiple stakes winning Hello Don Julio. Truthful is out of Faithful, a daughter of undefeated Champion Two-Year-Old Vindication and a half-sister to the Ashland Stakes (G1) heroine Well Chosen. Well Chosen is the dam of Telling, twice winner of the Sword Dancer Invitational Stakes (G1), and In Contention, successful four times in stakes events, including the Cherry Hill Mile Stakes (G3). Faithful is also half-sister to Lady of Choice, the dam of Multiple Choice, a three-time graded stakes winning and grade one placed sprinter, and granddam of six other stakes winners, most notably Leofric, winner of the Clark Handicap (G1).

This colt is bred on the same TrueNicks A++ cross as grade one winner Separationofpowers and graded winner Crewman. 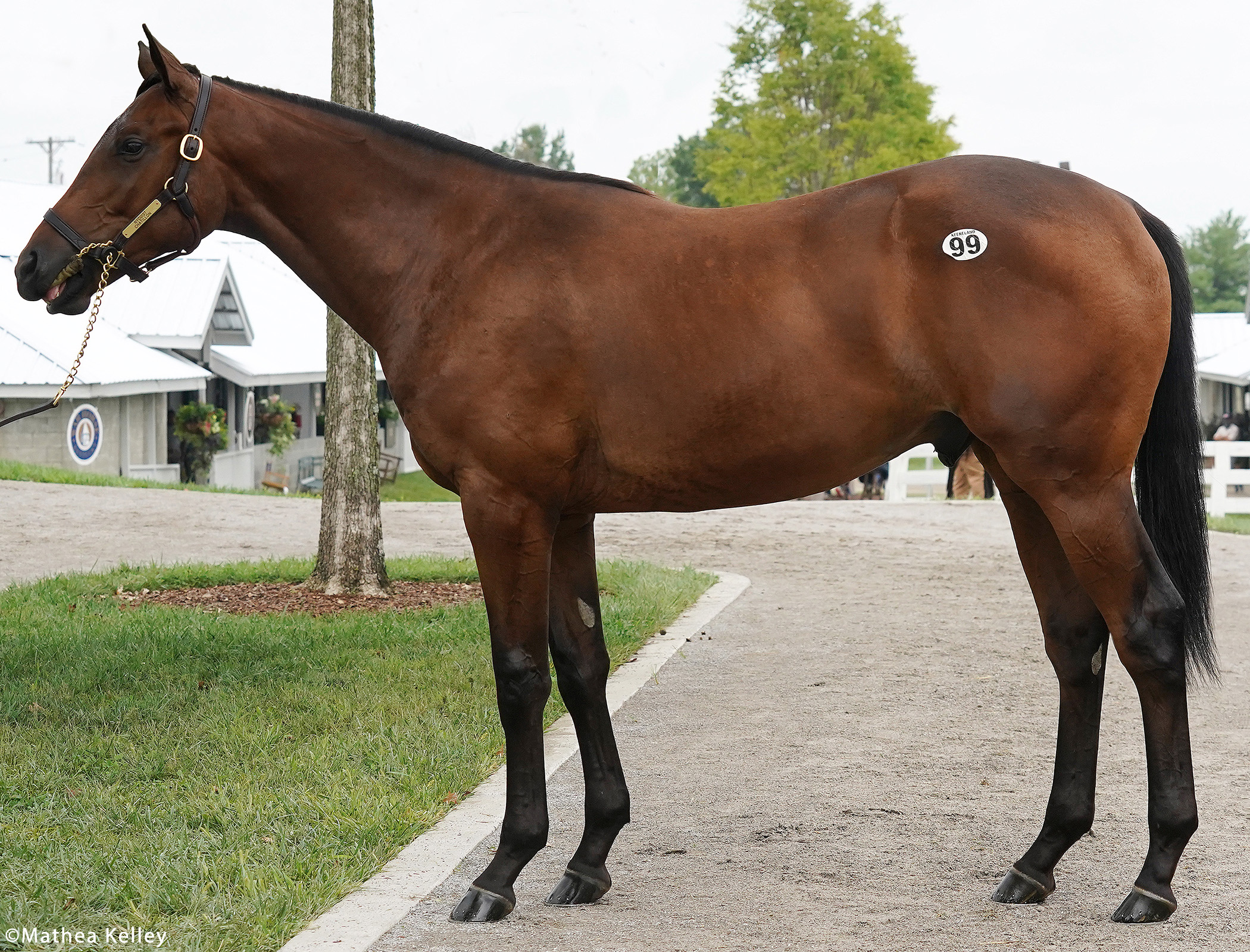 Nyquist was the second of just two horses to capture both the Breeders’ Cup Juvenile (G1) and Kentucky Derby (G1), and the first to do so having yet to taste defeat. Champion Nyquist is off to a tremendous start to his stud career. With his first crop of two-year-olds, the son of Uncle Mo is already sire of the Spinaway Stakes (G1) first and third, Vequist and Lady Lily, and Summer Stakes (G1) victor Gretzky The Great, who looms a major contender for the Breeders’ Cup Juvenile Turf (G1).

Centennial’s Nyquist colt is classically bred on both sides of his pedigree, as he is out of a mare by Horse of the Year Ghostzapper – also broodmare sire of undefeated Triple Crown captor Justify – from a stellar Overbrook Farm family.

He is the first foal of his dam, Chatillon. She is out of the A.P. Indy mare Calais, a sister to both classic sire and black-type performer Flanders Fields and Biscayne Bay, the dam of graded stakes winner Open Water. Calais is also three-quarters sister to Surfside, heroine of the Frizette Stakes (G1), Spinaway Stakes (G1), Las Virgenes Stakes (G1), and Santa Anita Oaks (G1). Surfside secured the Eclipse Award for Champion Three-Year-Old Filly by defeating older males by four lengths in the Clark Handicap (G2). In addition, Calais is half-sister to New Orleans Handicap (G2) winner and Stephen Foster Handicap (G1) placed sire Battle Plan and to the dam of stakes winner Holy Reina.

Chatillon’s granddam is Champion Two-Year-Old Filly, Flanders, herself a sister to Circle of Gold, the granddam of Cartier Champion Two-Year-Old, three-time Group 1 winner, and now fashionable sire Air Force Blue. Flanders is out of Starlet Storm, who is not only bred on an identical Storm Bird/Secretariat cross to Storm Cat but is also a sister to English juvenile group winner and graded stakes producer Storm Star.

This colt is bred on the Uncle Mo/Deputy Minister cross, rated TrueNicks A+. In addition, Nyquist’s initial G1 winners both possess the A.P. Indy line on the dam’s side, which Chatillon brings to the table through her dam, a daughter of the late legend. 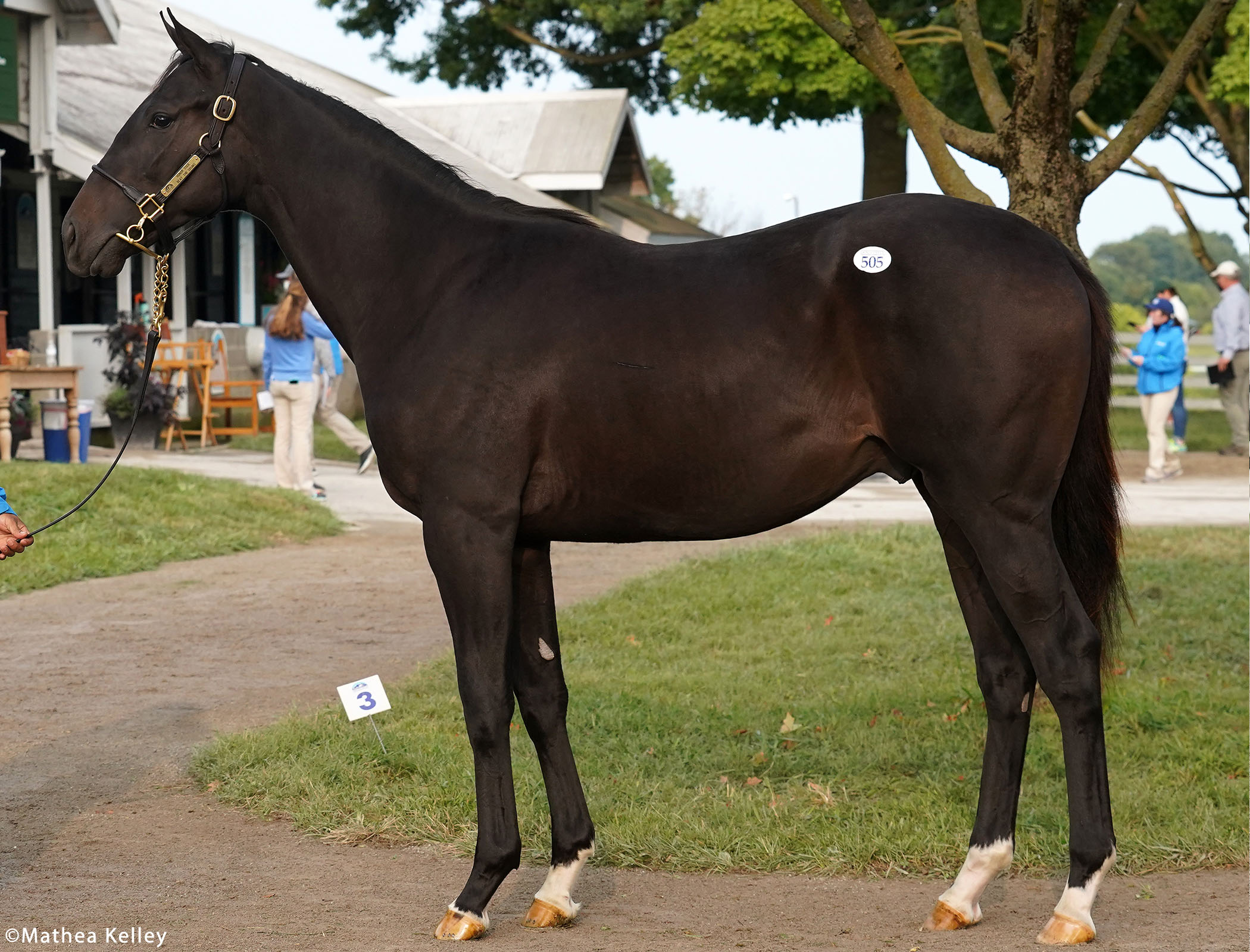 Honor Code is an Eclipse Award-winning champion, with a pedigree to match, and he’s also off to an impressive start at stud. There will be few better-bred Honor Code yearlings of 2020 than this colt, whose dam is by Smart Strike and out of a Champion Two-Year-Old Filly.

By A.P. Indy from a stakes winning Storm Cat granddaughter of Serena’s Song, Honor Code is one of the best bred horses at stud in North America. Successful in the Remsen Stakes (G2) at two, he earned an Eclipse Award as Champion Older Horse at four. With his first runners now three-years-old, Honor Code is represented by two of the top sophomores of the crop in Santa Anita Derby (G1) victor Honor A.P. and Max Player, successful in the Withers Stakes (G3) and placed in both the Belmont Stakes (G1) and Travers Stakes (G1).

This colt is out of Beat the Drums, a daughter of the stellar broodmare sire, Smart Strike, and a three-quarters-sister to the multiple graded stakes winning Teresa Z. Dynamic One, her first foal to race, took a NYRA maiden special weight by 5 1/4-lengths and was second, beaten just a head, in the G2 Wood Memorial.

As good as My Flag was, her dam, Personal Ensign, was even better. From Colin in 1908 to Personal Ensign 80 years later, no major U.S. stakes winner was able to retire undefeated. Personal Ensign had an unblemished record of 13 wins in 13 starts at two, three, and four, eight of them grade one, including the Breeders’ Cup Distaff (G1) and, facing males, the Whitney Handicap (G1). Personal Ensign was equally impressive as a producer. In addition to My Flag, she produced Jockey Club Gold Cup (G1) victor Miner’s Mark; Oaklawn Handicap (G1) winner Traditionally; multiple grade one placed Our Emblem, the sire of Kentucky Derby (G1) and Preakness Stakes (G1) winner War Emblem; and graded placed Salute, the dam of grade one winner and sire Mr. Speaker. Personal Ensign is also ancestress of grade one winner Seeking the Soul. This remains an active and productive family, with stakes winners like Performer, Breaking the Rules, and Jouster to its credit recently.

This colt is a product of the A.P. Indy/Smart Strike TrueNicks A+ cross that has produced no less than 18 stakes winners, including grade one scorer First Dude and graded winners Juanita, Moonlit Promise, Deceptive Vision, Sir Anthony, and Look Strike. It is also similar to the cross that produced Honor Code’s terrific Max Player. 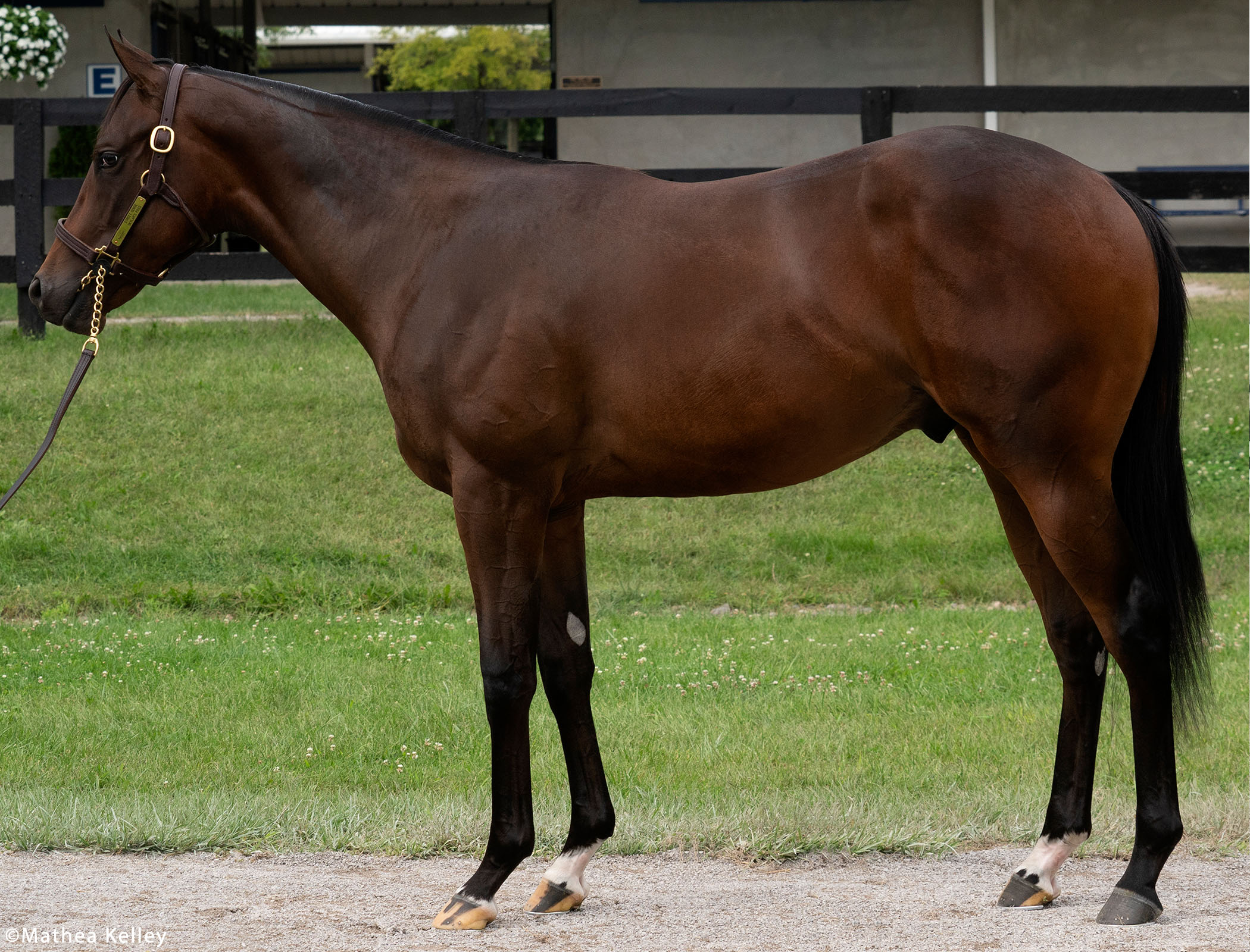 Since then, Street Sense has gone on to become an extremely successful sire, with 71 stakes winners, 33 of them graded, to his credit. Among them are the grade one winning colts McKinzie, Maxfield, and Hallowed Crown.

This speedy looking colt is the second foal of his dam, Skylar’s Pass. The first, Cheffy, a two-year-old son of Quality Road, realized $450,000 as a weanling, and has been working impressively at Saratoga, including two bullet works from his last three breezes. Skylar’s Pass is a half-sister to the talented and durable Proceed Bee, a winner of 20 races and over $800,000 from ages two to nine. Seven of those are stakes events, including the Hawthorne Derby (G3) and the John Battaglia Memorial Stakes, with black-type victories on dirt, turf, and all-weather surfaces to his credit.

This colt is a product of the very successful Street Sense/Danzig cross that has produced grade one winners Hallowed Crown and Politeness, graded stakes winners Tower of Texas, La Passe, Sensible Princess, and Motor City, in addition to five other stakes winners.

The total capitalization of this group is $2,000,000 with all expenses paid through December 2021. We are eagerly awaiting the future of these stunning colts and can’t wait for you to join us on their journeys. All four colts have already arrived in Middleburg and have settled in well. This will allow them to take full advantage of the lucrative Virginia-Certified Residency Program. Please contact the office for more information or if you would like a hard copy brochure.