The Keeneland September Yearling Sale brings together some of the best young horses in the country. “The World’s Yearling Sale” has seen its alumni win over 200 stakes races in 2021, including more than two dozen at the highest level. The Centennial Acquisition Team of Dr. Stephen Carr and Paula Parsons did a superb job looking for the next Wicked Strong, Preservationist, and Rocketry – all graduates of this sale. Their hard work allowed us to find four exciting colts while sticking to our price point in a competitive market. Each purchase boasts a great physical presence and strong pedigree that will make them desirable stallion prospects if successful on the racetrack. They are: 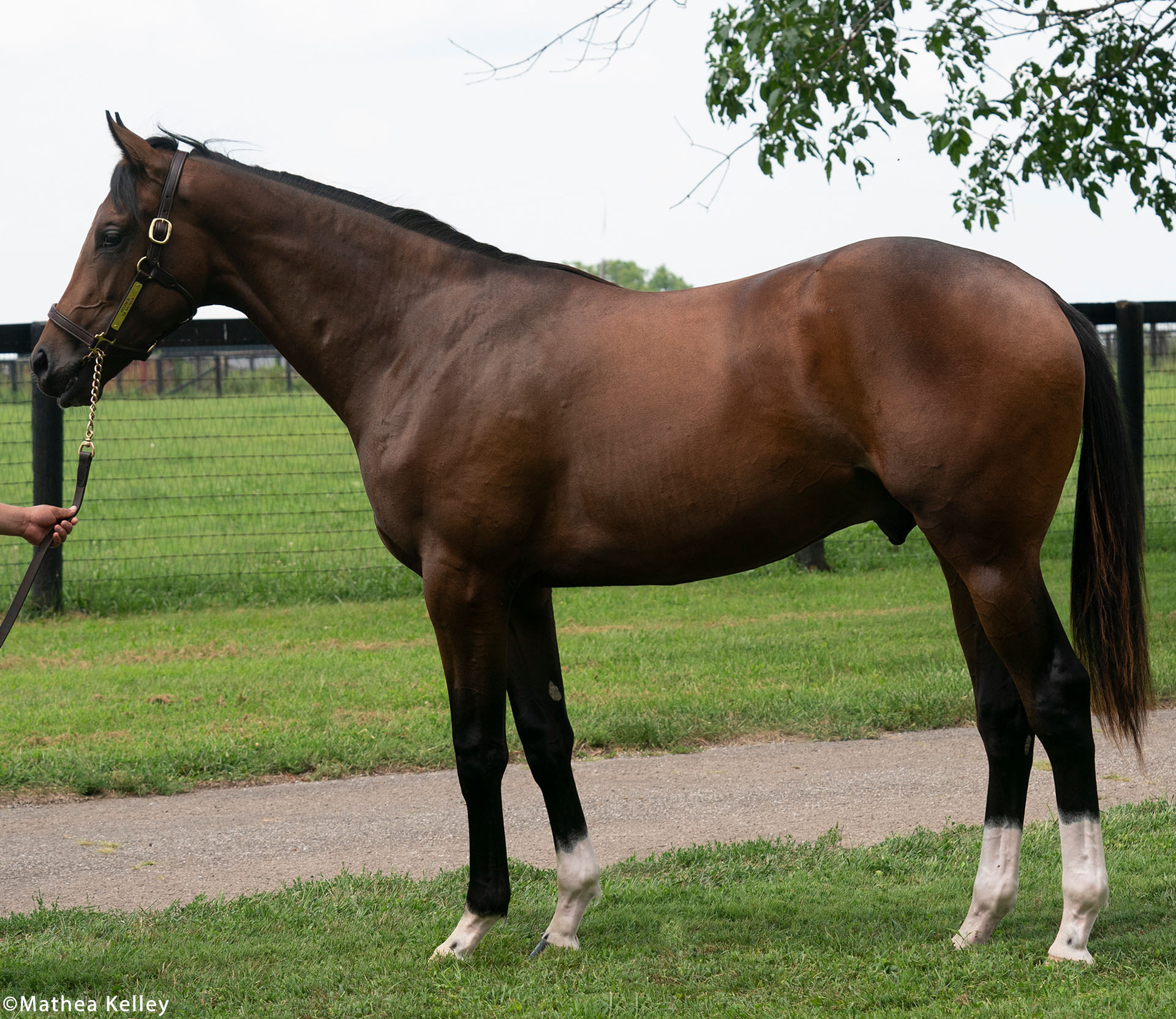 Over the last two years Violence has made headlines with brilliant colts such as Volatile, No Parole, and Dr. Schivel. Here, Centennial offers a Violence colt out of a mare by Bernardini, undoubtedly among the most sought-after broodmare sires in North America.

An outstanding son of Medaglia d’Oro, Violence was an undefeated juvenile who captured the Nashua Stakes (G2) and CashCall Futurity (G1). From his first four years at stud, he is the sire of 32 stakes winners, including four grade one winning colts.

This colt is out of Tia Rafaela, a daughter of Bernardini, A.P. Indy’s only Champion Three-Year-Old Colt, a leading sire, and a red-hot broodmare sire. With her first foal, and only runner to date, Tia Rafaela is dam of Regal Quality, a winner of four races and over $150,000 through the summer.

Tia Rafaela is half-sister to an accomplished performer and proven producer in Vagrancy Handicap (G2) winner Shawklit Mint. She is dam of stakes placed Eager Emma and the granddam of Crafty Daddy, a stakes winner who took second in the American Derby (G2), and Morestride, an active stakes-placed winner of five of his nine lifetime starts.

The mating gives a version of the TrueNicks A+ rated version of the Medaglia d’Oro / Bernardini cross which has produced a stakes winner for Violence. 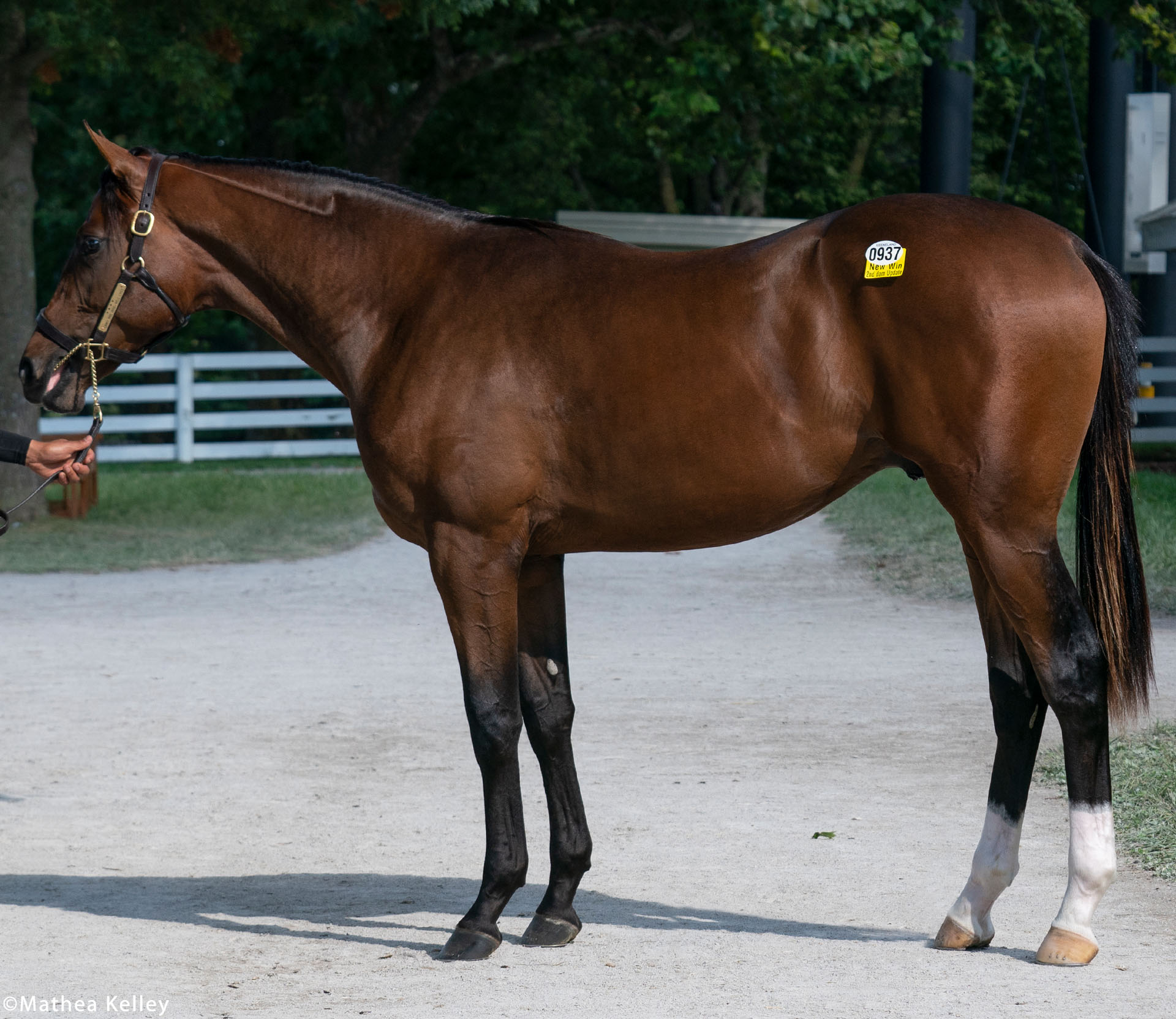 An undefeated Champion, Candy Ride has developed into an extremely consistent supplier of class, particularly through his sons. He is the sire of 100 stakes winners and no less than 17 individual grade one winners. They include Horse of the Year Gun Runner; Champion Two-Year-Olds Game Winner and Shared Belief; and grade one victors Twirling Candy, Sidney’s Candy, Misremembered, Rock Your World, Capt. Candyman Can, Leofric, Mastery, El Brujo, and Ascend. Ten sons of Candy Ride have already sired stakes winners, including Centennial’s Unified, with four of them already having sired grade one winners.

Well Lived is a sister to a true celebrity in Well Armed, winner of the Dubai World Cup (G1), Goodwood Stakes (G1), San Diego Handicap (G2), and San Antonio Handicap (G2). She is also a sister to stakes placed track record setter Only in America and Life Well Lived, the dam of the Maker’s 46 Mile (G1) victor American Patriot and stakes winner Well Humored. Well Lived’s half-siblings include Railbird Stakes (G3) heroine Witty, the dam of graded scorer Bombard; Travers Stakes (G1) third Helsinki; O’Toole, the dam of stakes winner Lady O’Toole (by a son of Tiznow, the sire of Well Lived) and granddam of millionaire Mr. Money (out of a mare by Tiznow); and Formalities Aside, the dam of multiple stakes winner and multiple graded stakes placed Awesome Flower.

This colt’s second dam, Well Dressed, is also a stakes winner. She is out of stakes winner Trithenia, a half-sister to graded winner Tee Kay, the dam of Symboli Kris S, Champion Three-Year-Old Colt, Champion Older Horse, two-time Horse of the Year, and standout sire in Japan.

Tiznow, a two-time winner of the Breeders’ Cup Classic, has proven himself to be an outstanding broodmare sire. His success in that arena was on full display in 2020 with leading three-year-old Tiz the Law and G1 winning older horse True Timber to his credit. 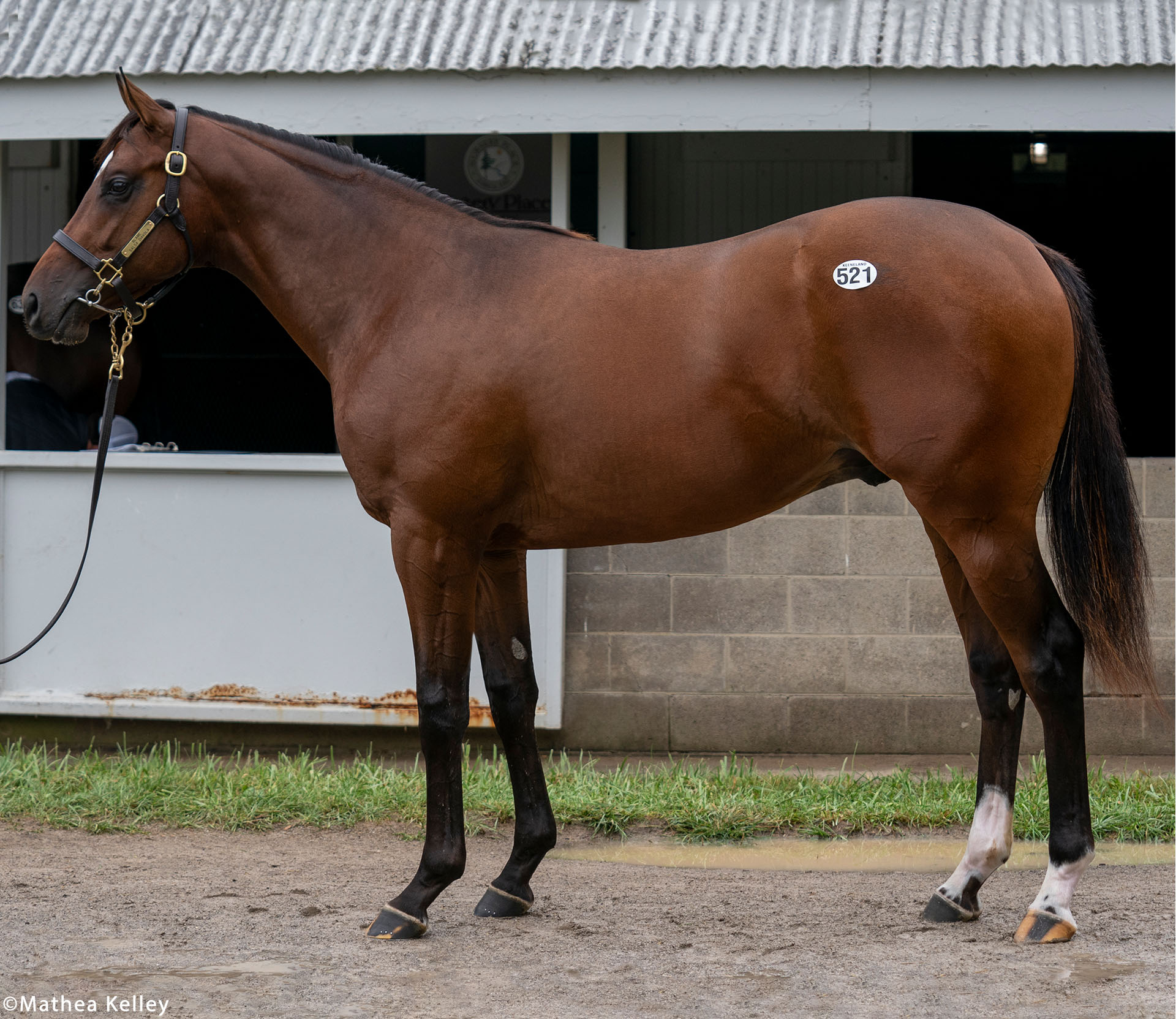 Champion Older Horse Blame, conqueror of Zenyatta in the Breeders’ Cup Classic (G1), has evolved into an extremely reliable sire of stakes horses. To date, he is sire of nearly 40 stakes winners including the grade one scorers Nadal, Marley’s Freedom, Fault, Senga, and Abscond.

This Blame colt is a three-quarters brother to the highly accomplished Blamed, an earner of more $600,000, who recorded victories in the Comely Stakes (G3), Royal Delta Stakes (G3), Sunland Park Oaks, and El Paso Times Stakes, in addition to hitting the board in the Raven Run Stakes (G2), Honorable Miss Stakes (G2), and Shine Again Stakes.

This colt’s dam, Salsa Diavola, is a daughter of Horse of the Year Mineshaft. She is half-sister to accomplished runners in stakes placed Salsa Star and the high-class sprinter Pacific Ocean – successful in the James Marvin Stakes (G3) at Saratoga and the Vernon O. Underwood Stakes (G3) at Hollywood Park – and a proven producer in the dam of graded placed Sense of Bravery.

Second dam Miss Salsa is a daughter of Unbridled out of the Seattle Slew mare Oscillate, making her a half-sister to stakes winner and successful sire Mutakddim. Oscillate is the ancestress of stakes winners on four continents, including the Suburban Handicap (G1) scorer Frost Giant, and group/graded winners Sea Chanter, Kavanagh, Skyward, Siyoushake, Oregon Lady, and Playwright.

Oscillate herself is a half-sister to Champion Two-Year-Old and Travers (G1) winner Rhythm and graded winner Miss Lucky, all out of grade one winner Dance Number, ancestress of Kentucky Derby (G1) hero Super Saver, and G1 winners Girolamo, Got Lucky, and Bluegrass Cat. Dance Number, by the legendary Northern Dancer and out of Two-Year-Old Champion Numbered Account, hails from one of the strongest branches of the family founded by that greatest of tap-root mares, La Troienne.

This colt is bred on a version of the highly successful Blame/A.P. Indy cross, rated A by TrueNicks, which has produced seven stakes winners including group/grade one winners Nadal and Senga, and graded winner Far From Over. Mineshaft has established himself as an excellent broodmare sire with 2020 Champion Two-Year-Old Filly Vequist among his triumphs. 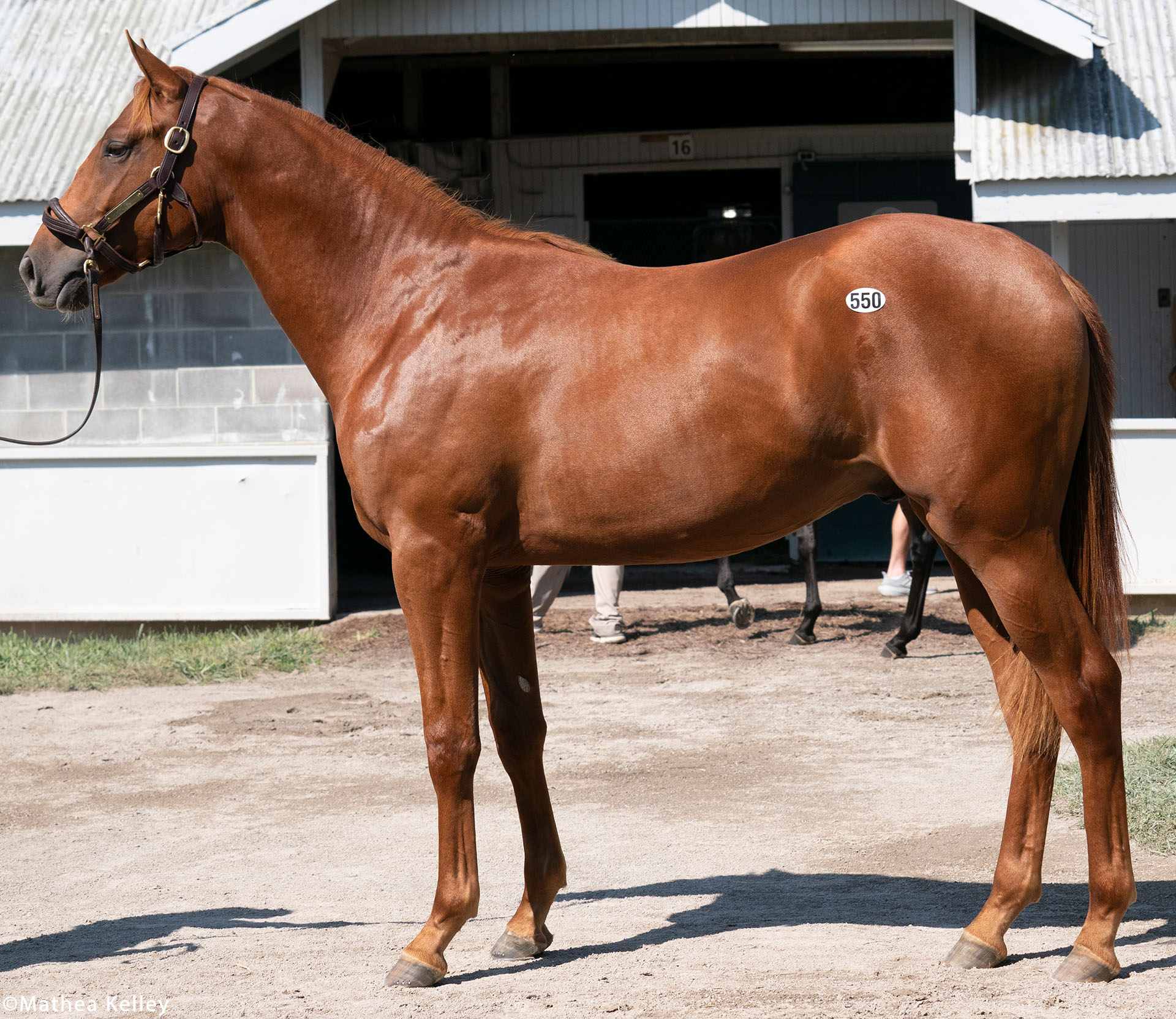 Mastery was, like his sire, an undefeated grade one winner… and what a sire that is. Candy Ride has firmly established himself as an outstanding sire and now a sire of sires, including Twirling Candy and Gun Runner. At two, Mastery captured the Bob Hope Stakes (G3) and the CashCall Futurity (G1), the latter by 7 ½-lengths. At three, he captured the San Felipe Stakes (G2) by 6 ¾-lengths over a field that included future Santa Anita Derby (G1) victor Gormley.

Centennial’s Mastery colt is out of the young stakes producing Street Cry mare Spring Street. She is the dam of three winners with her first three foals, including Plentiful, winner of eleven races including the listed Manitoba Derby. Her fourth foal, Khafre, a son of American Pharoah, carried the Centennial colors to a third in his only start to date and continues to show promise.

Spring Street is bred on an identical cross to grade one winner Seventh Street and graded winner Street Magician. Her dam, Spring Meadow, was a superior speedster who captured four black-type events, including the Las Flores Handicap (G3), and placed in the La Brea Stakes (G1) and Prioress Stakes (G1).

Spring Street’s granddam, Go for It Lady, is by Mr. Prospector out of the stakes winning Northern Dancer mare Ladyago, also the granddam of stakes winners Chestnut Lady and Our Lady Allie, and third dam of stakes winner Aithon. Ladyago’s own dam, Queen of Song, was also a fine runner, taking the Shuvee Handicap (G2), Sixty Sails Handicap (G3), and four other stakes events. She was a sister to grade one winner and successful sire Cormorant and is ancestress of 16 stakes winners, including grade one scorer Emulous, and 2021 standout three-year-old Mandaloun, winner of the Haskell Stakes (G1) and second past the wire in the Kentucky Derby (G1).

Street Cry, the sire of Spring Street, has shown himself to be a truly phenomenal broodmare sire, with divisional leaders and multiple grade one winners like Domestic Spending, Vino Rosso, and Diversify to his credit in recent years. The Candy Ride line has proven to be successful with descendants of Mr. Prospector, like Street Cry, including Vekoma, Twirling Candy, and Ascend, all winners at the highest level.

At this time, our minimum subscription amount is 2.5% ($56,250) with a total capitalization of $2,250,000.  That accounts for all of their expenses through the conclusion of 2022 and includes contributions to our Equine Retirement Fund. We are eagerly awaiting the future of these stunning colts and can’t wait for you to join us on their journeys. All four colts are on their way to Middleburg. This will allow them to take full advantage of the lucrative Virginia-Certified Residency Program. Please contact the office for more information or if you would like a hard copy brochure.