2021 marked the return of the historic Fasig-Tipton Saratoga Yearling Sale following a one year hiatus. How historic? It was the 100th edition edition of the prestigious sale. Few, if any, have had the success Centennial Farms has had out of this sale. Paula Parsons and Dr. Stephen Carr have led us to purchase eight G1 horses, including Aptostar, champion Rubiano, Belmont Stakes victor Colonial Affair, Breeders’ Cup winner Corinthian, and exciting freshman sire Unified. Their diligent work at the storied sales grounds led to the purchase of a colt who has an excellent chance to add his name to that star-studded list. 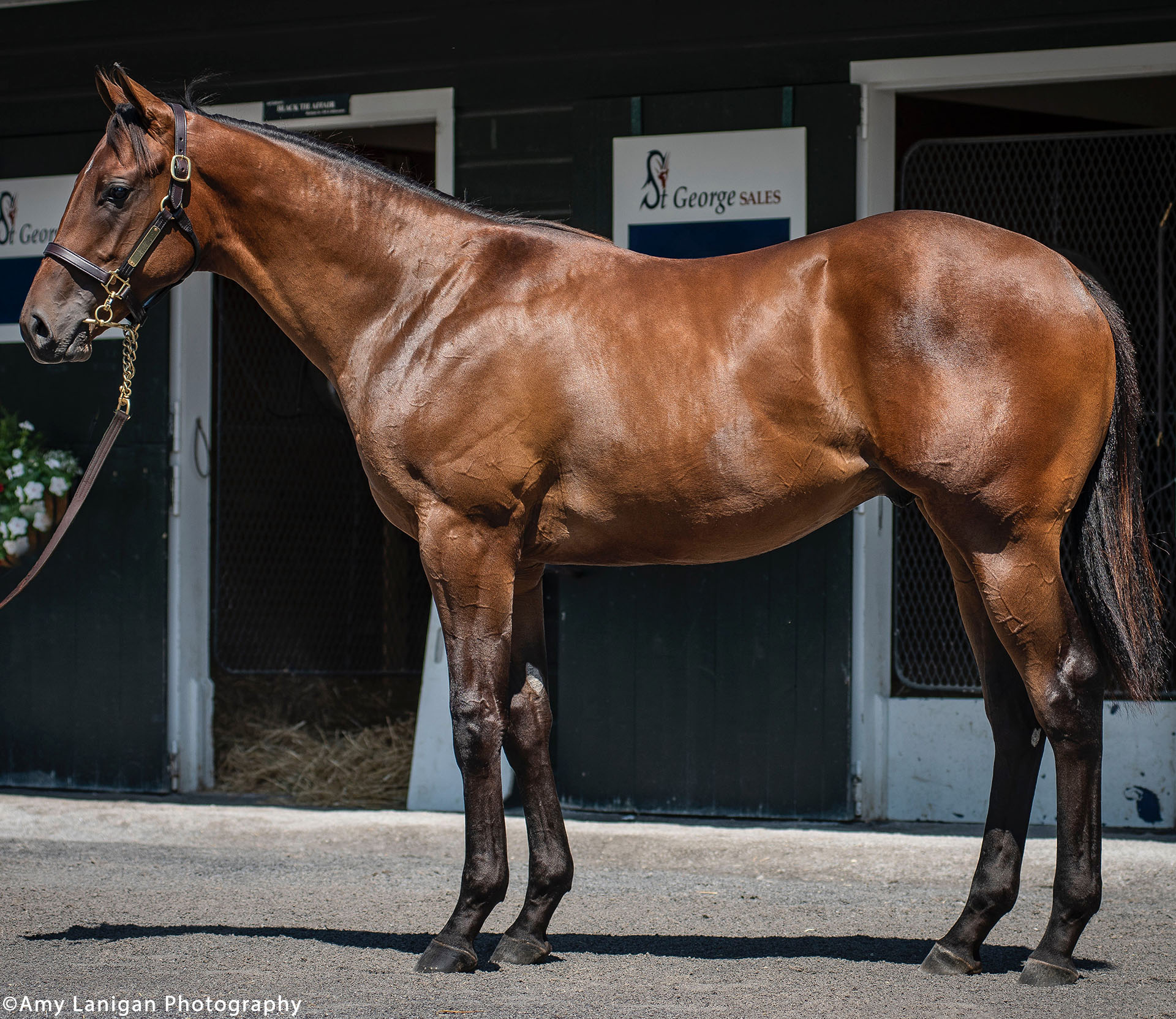 Hailed as, “The Man o’ War of the 20th century,” Arrogate was a racehorse of astonishing ability. On his stakes debut, he routed the opposition in the Travers Stakes (G1), scoring by 13½ lengths, smashing the long-standing track-record while defeating the likes of Gun Runner, Gift Box, Exaggerator, Connect, Creator, and Laoban. In doing so, he earned a Beyer Speed Figure of 122, the highest earned by a three-year-old since the publication of the figures.

Arrogate went on to defeat two-time Horse of the Year California Chrome in a stirring battle for the Breeders’ Cup Classic (G1), clinching an Eclipse Award as Champion Three-Year-Old Male, and official recognition as the 2016 Longines World’s Best Racehorse.

All eyes were on Arrogate as he opened his four-year-old campaign with a track-record breaking win in the inaugural Pegasus World Cup Invitational Stakes (G1), while again defeating California Chrome. All of that, however, was just a prelude to Arrogate’s greatest performance. In the Dubai World Cup (G1), Arrogate was squeezed back at the start, leaving him in a seemingly hopeless position more than a dozen lengths off the lead. Such was his talent, however, that not only did he catch future Horse of the Year Gun Runner but passed him easily. He drew off for a 2 ¼-lengths victory, just missing the track-record. Not surprisingly, given this remarkable effort, Arrogate was rated as the World’s Best Racehorse for the second straight year.

Centennial’s Arrogate colt is not only out of an accomplished young mare but is bred on a proven cross. His dam, Stellaris, is by Harlan’s Holiday, perhaps best known as the sire of Into Mischief. Stellaris was a successful runner in her own right, finishing second in the Del Mar Oaks (G1) and the Arlington Oaks (G3). Her first foal, the current four-year-old Kinenos, is a winner of three races, $185,365, and earned black-type when third in the Caesars Stakes. Note that Kinenos is by a son of Unbridled, also the grandsire of Arrogate.

This colt’s female family has been consistently turning out good horses for generations. Stellaris is half-sister to the dam of stakes winner Princess Vivian. The granddam of Stellaris, the Deputy Minister mare See Moon, is a three-quarters sister to graded stakes winner Atelier, and to stakes winners Alchemilla and Arabis. This is the most famous of all native North American families, tracing back to the great mare Wanda, ancestress of Kentucky Derby winners Clyde Van Dusen, Iron Liege, Swaps, Kauai King, and California Chrome. This particular branch of the family, that of Courtly Dee, has produced more than 100 stakes winners, 15 of them grade one, including champions Althea, Bayer, and Covfefe, as well as Arch, Acoma, and the breed-shaping English sire Green Desert. The family’s success in turning out stakes horses has already hit home for Centennial Farms – G1 winner and millionaire Preservationist is a son of Arch.

The 2021 Kiawah, LLC has a total capitalization of $750,000 which includes all operating costs through 2022.   Minimum investments start at $37,500 for 5% interest. This promising colt has already settled in at the farm in Middleburg, where he will undergo his early training and be made eligible for the lucrative Virginia Residency Program. Please contact us any time for more information or if you would like to be a part of his journey.