The 101st Fasig-Tipton Saratoga Sale was spectacular, breaking records for gross, average, and median. Dr. Stephen Carr and Paula Parsons led the the Centennial Farms team through this competitive environment to land a truly special colt with all of the attributes to be a star on-track and at stud. 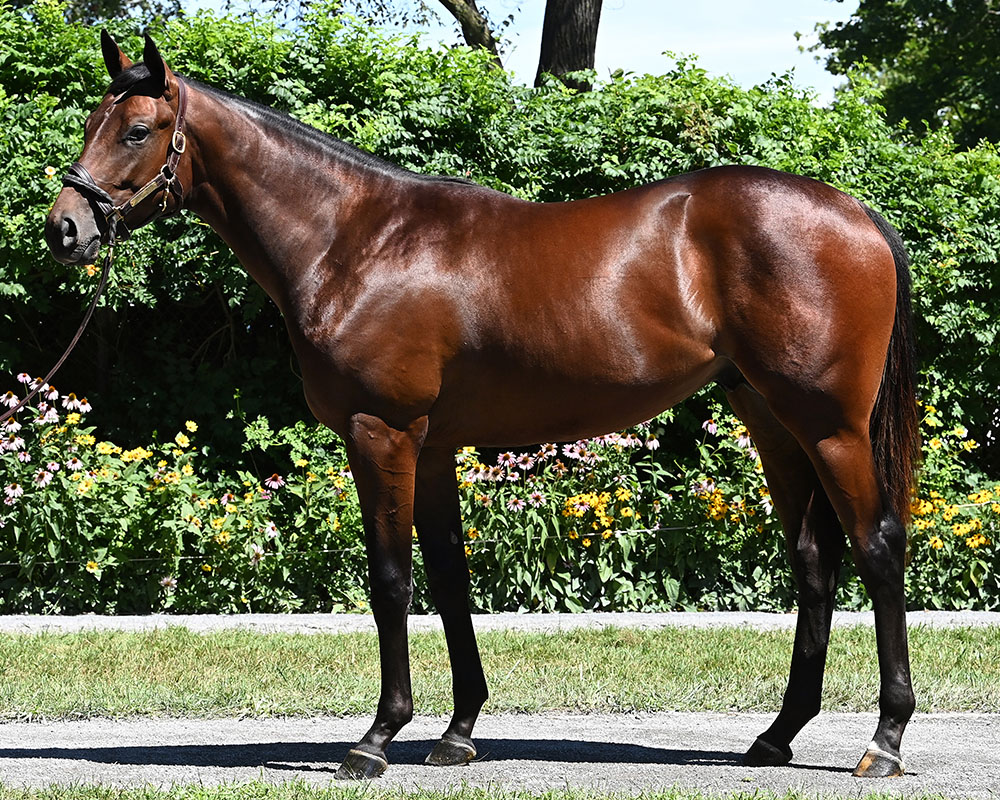 There are few more exciting young stallions in the country than City of Light. The outstanding son of spectacular racehorse and exceptional sire Quality Road, City of Light was a performer of rare brilliance and versatility. At seven furlongs he took both the Malibu Stakes (G1) and Triple Bend Stakes (G1). He proved his ability over eight furlongs with a decisive victory in the Breeders’ Cup Dirt Mile (G1), and carried his speed 1 1/8-miles to capture the Oaklawn Handicap (G2) and Pegasus World Cup Invitational (G1), defeating Champion Older Horse Accelerate on both occasions. In 2021, Quality Road was the Leading North America Sire by Yearling Average, and City of Light himself was sixth, trailing only Justify among freshman sires.

This City of Light colt is out of Legal Tender, a young Giant’s Causeway mare from a very active family. Note that Giant’s Causeway, a European Horse of the Year and three-time Leading Sire in North America, has earned a reputation as a stellar broodmare sire. That reputation is backed up by the numbers. His daughters have produced over 180 stakes winners, 30 grade one, including Horse of the Year and stallion sensation Gun Runner. Giant’s Causeway currently sits second on the Leading Broodmare Sire list with triple G1 winner Lord North leading his active descendants.

Miss Luann, the dam of Legal Tender, is a black-type placed daughter of Unbridled’s Song. With her first two foals, Miss Luann produced Sharp Kitty, winner of the Christmas Past Stakes at Gulfstream Park, and Nomorerichblondes, who captured the UAE Oaks (G3). Miss Luann’s 2021 foal, a filly by Quality Road and thus a close relative to this colt, commanded $700,000 at the 2022 Fasig-Tipton Saratoga Sale. While Miss Luann’s daughters are still quite young, it is worth noting that Sharp Kitty has already produced a winner.

Miss Luann is half-sister to Choice Play, stakes placed and the dam of several winners, and is a sister to Catch My Eye, the dam of Maxim Rate, heroine of three graded stakes including the 2021 Gamely Stakes (G1), who sold as a broodmare prospect for $1,200,000 at the 2021 Keeneland November Sales.

Miss Luann is out of the multiple winning Storm Cat mare Sharp Eyes, a half-sister to French Champion Celtic Celeb and to graded winner Gaelic Queen, who was a nose shy of being stakes placed. Their dam, Gaelic Bird won the Prix de Sandringham (G3) and Prix Chloe (G3) in France, and the Brown Bess Breeders’ Cup Handicap once imported. Gaelic Bird is half-sister to stakes winner Gold Bird, who is the dam of G1 winners Gabina and Galetto, and granddam of G1 winner Goldmark. This is a branch of the family of Alablue, the ancestress of Harlan’s Holiday, MG1W and the sire of Into Mischief, Champion Two-Year-Old Classic Empire, and Cryptoclearance, Devil May Care, Revidere, Princessnesian, Boldnesian and Thirty Slews, all of whom won at the highest level.

This colt is bred on the same Quality Road/Storm Cat cross that has produced Breeders’ Cup winner Hootenanny in addition to graded winners Blofeld, Butterbean, Dr. Post, Friar’s Road (out of a Giant’s Causeway mare, like this colt), Great Stuff, and Princess La Quinta.

At this time, our minimum subscription amount is 5% ($36,250) with a total capitalization of $725,000.  That accounts for all of his expenses through the conclusion of 2022 and includes contributions to our Equine Retirement Fund. He has already arrived in Middleburg, where he will be made eligible for the lucrative Virginia Residency Program. Please contact the office for more information or if you would like a hard copy brochure.