Over 1000 two-year-olds in training gathered in Ocala for the OBS Spring Sale. A bevy of recent stars have graduated from the prestigious sale, including 2021 Breeders’ Cup juvenile winner Corniche, two-time Pegasus World Cup Turf victor Colonel Liam, and the winners of both the Saudi Cup and Dubai World Cup this year in Emblem Road and Country Grammer. It was there that Centennial Farms was able to acquire a striking individual with a world-class pedigree to match. 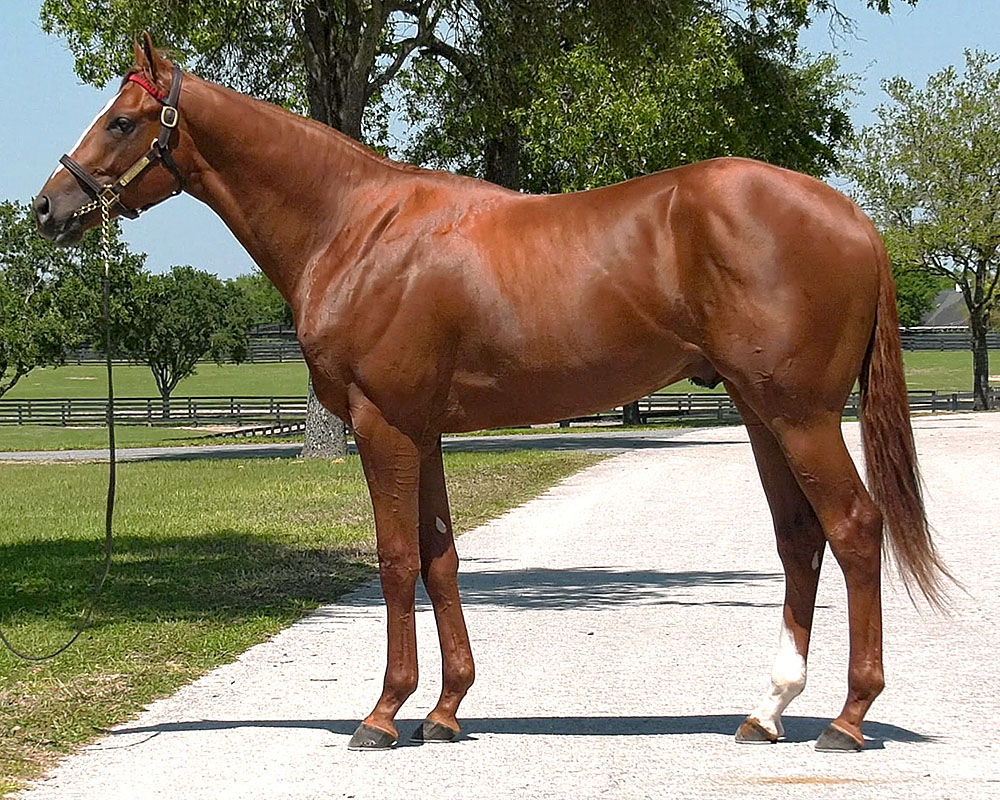 Represented by nearly 130 stakes winners, Malibu Moon has been one of the most prolific stallion sons of A.P. Indy, himself one of the greatest ever influences for classic distance dirt performance. This classically-bred son of Malibu Moon owns a particularly intriguing pedigree, as he adds in a second source of A.P. Indy. This pattern of inbreeding to A.P. Indy is already found in 66 stakes winners, 18 of them graded, and six grade one.

The dam of this colt, Lost Empire, is by an outstanding classic influence in the late Empire Maker, who has proven to be an elite broodmare sire. With her first two foals, Lost Empire is the dam of multiple winner Arsenic and Lace and multiple allowance winner Lontani, successful five times to date.

Lost Empire is a three-quarters sister to Aurelius Maximus, a talented performer who came within a neck of capturing the Fayette Stakes (G2). She is also a half-sister to Chief Havoc, who went wire-to-wire in one of the West Coast’s most prestigious three-year-old tests, the Swaps Stakes (G2). Both brothers are now retired to stud. Lost Empire’s half-sisters include the multiple graded placed Special Event and the dam of graded placed Tejana.

The second dam of this colt, La Reina, is an A.P. Indy daughter who captured the Tempted Stakes (G3) at two and was second in three other graded stakes. La Reina is a half-sister to Hollywood Derby (G1) victor Brahms, stakes winner Olympic, and the dam of stakes winner Anegada.

La Reina’s dam, Queena, earned an Eclipse Award as Champion Older Mare. She is a daughter of Mr. Prospector and grade one winner Too Chic, making her a full-sister to Chic Shirine, heroine of the Ashland Stakes (G1) and ancestress of 22 stakes winners. Nineteen of those are graded stakes winners, of which seven won grade ones, including Keen Ice, conqueror of American Pharoah in the Travers Stakes (G1); Verrazano, who ran the highest three-year-old Beyer of his crop when winning the Haskell Invitational Stakes (G1); and Centennial’s own Woodward Stakes (G1) victor and millionaire Preservationist. Chic Shirine is also the ancestress of graded and multiple stakes winning Soaring Empire, who as a son of Empire Maker out of an A.P. Indy mare, is very closely related to the dam of this colt. The family is extremely active and regularly adds new noteworthy performers – Olympiad, ranked among the top 10 older horses in the country with three of 2022’s top 20 dirt route Beyers to his credit, is a descendant of Chic Shirine.

As a son of Malibu Moon out of an Unbridled-line mare, this colt is bred on the same cross as Kentucky Derby (G1) winner Orb and six other Malibu Moon stakes winners, including Magnum Moon, impressive winner of the Rebel Stakes (G2) and Arkansas Derby (G1), multiple grade one winner Moonshine Memories, and multiple graded winner Farrell.

At this time, our minimum subscription amount is 5% ($21,250) with a total capitalization of $425,000.  That accounts for all of his expenses through the conclusion of 2022 and includes contributions to our Equine Retirement Fund. We are eagerly awaiting the future of this exciting colt and can’t wait for you to join us. He will be given some time to unwind from the sale in Middleburg before targeting shipping to the racetrack. Please contact the office for more information or if you would like a hard copy brochure.