Just four and a half months in to 2016, Centennial Farms has already exceeded last year’s total wins. We’ll look to keep the success coming with a potentially big weekend coming up at Belmont Park where Unified and Securitiz tackle stakes company on Saturday and Sunday.

Undefeated Unified, brilliant in two starts sprinting, has been installed as the 4-5 morning line favorite in the G2 Peter Pan Stakes. The 1 1/8 mile fixture represents his first attempt at a route distance. Stretching out from 7-furlongs is a big step for a lightly raced horse, but as Don Little, Jr. noted, “Every step that he’s taken has been a big step.” Unified has taken each one thus far with style. “He’s off to a good start, hopefully we can keep the train rolling a little bit,” Little said.

Securitiz makes his stakes debut in the inaugural edition of the Flat Out Stakes. A marathon at 1 3/8 miles, the race drew a small but tough group. Grade 1-placed stakes winner Elnaawi has been installed as the 8-5 morning line favorite. Securitiz, coming off a game victory at Gulfstream Park in February, is 8-1 with Joel Rosario board.

“He’s been a nice horse. He’s been a very consistent horse for us. He’s only won two but he’s been right in it,” said Little, adding “He tries hard every time.”

The G2 Peter Pan goes as the ninth race of an eleven race card on Saturday at Belmont Park with a scheduled post time of 5:45. Sunday’s Flat Out is the featured eighth race on a nine race card to close out the racing week. Post time is 5:13. Both races can be streamed live on NYRA.com. 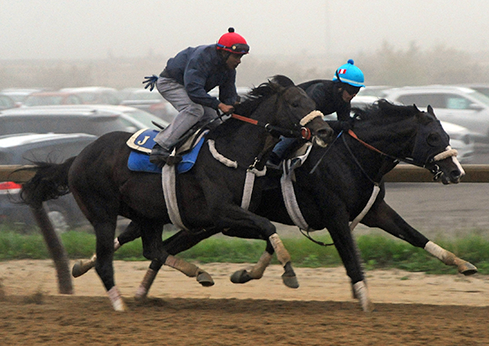 Securitiz (inside) and Unified (outside) breeze together on May 8 in preparation for their stakes engagements.