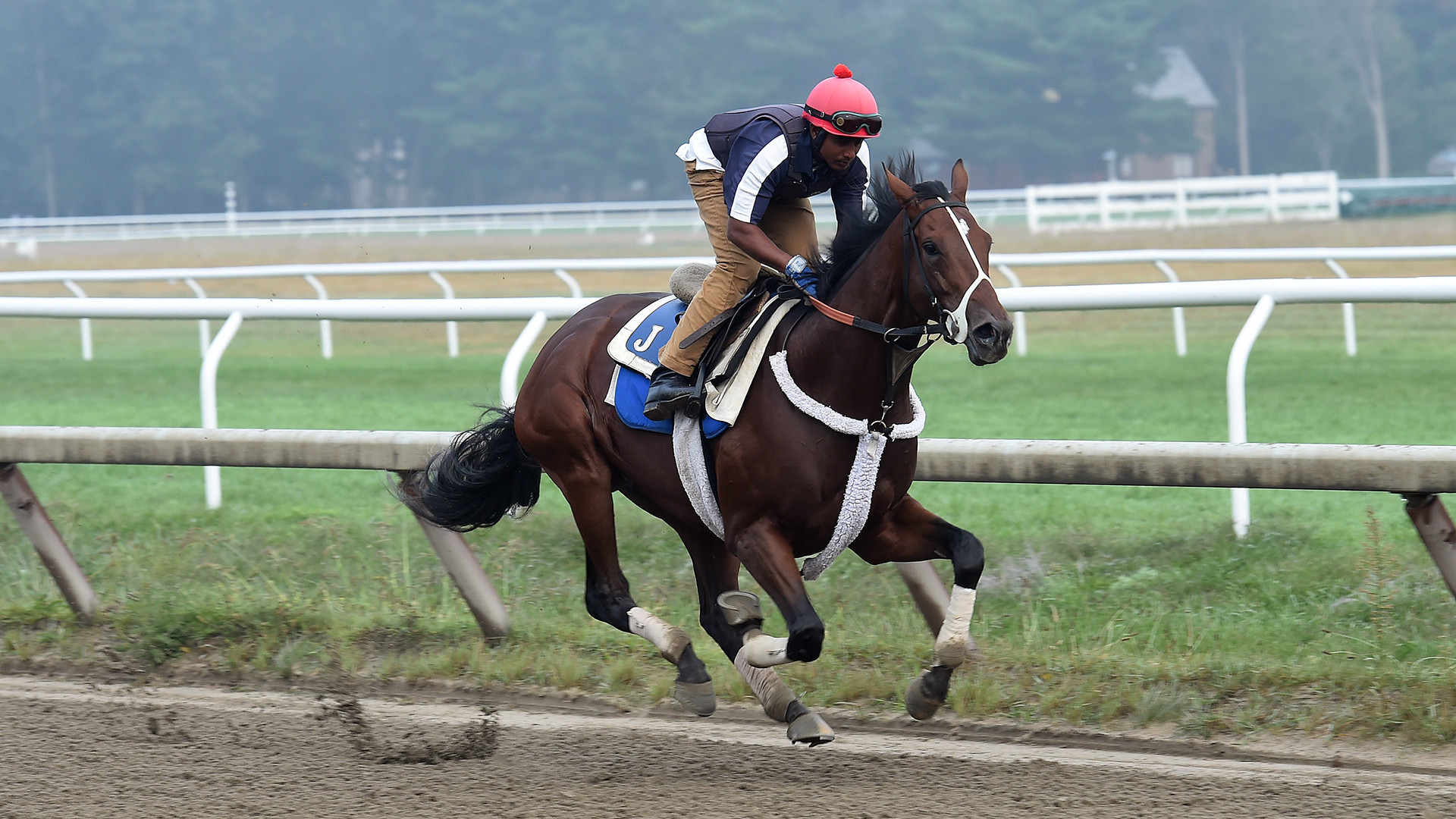 Popular and talented, few horses have made the impact during their career as Wicked Strong. Purchased for $375,000 as a yearling, the good-looking colt was originally dubbed Moyne Spun, a play on his parents’ names. That changed early in his two-year-old year. The tragic bombing at the Boston Marathon inspired a transformation in memory of the victims and the city that Centennial Farms calls home – Wicked Strong. Even more meaningfully, a pledge was made. A percentage of the talented colt’s earnings would go to the One Fund, a charity to assist those who had been affected by the bombing. That partnership proved to be one of the most rewarding experiences anyone at Centennial has had in racing.

Wicked Strong broke his maiden in his second career start, an impressive victory at Belmont Park. Moved immediately into stakes company, he broke awkwardly and raced greenly in the G2 Remsen. Despite that, his strong effort to close for third, beaten just over a half-length by future champion Honor Code, stamped Wicked as a major contender on the Triple Crown trail.

It was an unlucky winter in Florida before it was time to head back home to New York. It was there that Wicked Strong delivered the breakout performance we knew he was capable of. Dismissed as the fifth choice in the $1,000,000 Grade 1 twinspires.com Wood Memorial, he rated kindly in mid-pack before delivering a devastating final kick that left the field over three lengths behind. And just like that, our philosophy of letting our horses take us where they belong was taking us to the Kentucky Derby.

After a stumbling start, Wicked Strong encountered the traditional traffic trouble in the nineteen horse field, particularly when weaving his way through the stretch. His tremendous attitude and resilience refused to let him quit, as he came on strongly to finish fourth. Carried wide in the Belmont Stakes next out, Wicked Strong again finished fourth. This time he was on even terms with the Derby and Preakness winner, California Chrome, who would go on to claim Horse of the Year honors.

With the Triple Crown in the rearview mirror we set our sights on beloved Saratoga. Wicked Strong didn’t disappoint. He buried the field in the G2 Jim Dandy, leaving Belmont Stakes winner Tonalist over two lengths behind. The big colt followed that up with a heartbreaker of a loss in the G1 Travers. In the lead in the stretch after being caught wide, stablemate V. E. Day and Travers wizard Javier Castellano just nailed him at the wire. It was a 1-2 finish for our outstanding trainer Jimmy Jerkens.

He headed back to Belmont to target the G1 Jockey Club Gold Cup and a potential start in the G1 Breeders’ Cup Classic at Santa Anita. All that changed just over a half-mile into the Gold Cup. Impeded by Moreno, everyone held their breath as Wicked Strong stumbled badly, unseating jockey Rajiv Maragh. Maragh suffered a broken arm and although Wicked, luckily, remained unharmed, the decision was made to put him away for the remainder of his three-year-old season.

Brought back bigger, stronger, and tougher at four, Wicked Strong was not remarkably luckier in his final campaign. Despite going winless on the season, he continued to cement his standing as one of the best of his generation. He was stakes placed on a quartet of occasions, including on turf (behind millionaire King Kreesa, a son of our own King Cugat) and in a pair of Grade 1 affairs, the Woodward and Jockey Club Gold Cup. Wicked Strong concluded his career in the G1 Las Vegas Breeders’ Cup Dirt Mile. After being squeezed at the start and carried wide throughout, he finished fourth to bring his lifetime career earnings to just shy of $2,000,000.

Two days after the Breeders’ Cup, the star of the Horizon, LLC headed off to his second career. Wicked Strong is a natural fit for prestigious Spendthrift Farm in Lexington, Kentucky, where B. Wayne Hughes and his team have assembled one of the best young stallion rosters in the nation. As a Grade 1 winner of over $1.9 million, Wicked Strong is among the leading earners in the star-studded stallion barn. He is the natural next step toward carrying the immortal Danzig blood into another generation as the most accomplished offspring of one of Danzig’s best sons in Hard Spun. That noteworthy pedigree is joined by classic good looks to make Wicked Strong a can’t-miss stallion prospect.

It comes as no surprise to all who were involved with Wicked Strong throughout his career that breeders agree. His first book filled right off the bat.

The first foals by Wicked Strong will arrive in 2017 and we can’t wait to see them do their sire proud.

The unofficial Centennial Farms kick-off to 2016 came not on the racetrack but at a conference. Don Little, Jr. was invited to speak at the National Owners Conference held at... Read More
November 3, 2015 in Horizon, Latest News, Wicked Strong

The star of the Horizon, LLC headed off to his second career on November 1. Wicked Strong, a $375,000 yearling purchase who went on to earn just shy of $2... Read More
October 21, 2015 in Horizon, Latest News, Wicked Strong

Could join Centennial's Corinthian in history books It's hard to believe that it's been eight years since Corinthian splashed to victory on a sloppy Monmouth Park track to take the... Read More