Keeneland’s September Sale prides itself on being the world’s largest sale of racing prospects and the results speak for themselves – through Labor Day, graduates had won 312 stakes races in 2019, including 42 at the highest level. Over 4,600 yearlings were cataloged over the ten day sale. The Centennial Farms acquisition team focused their efforts on the three days of Book One whose yearlings are pre-selected for prestigious placement for their world-class pedigrees and outstanding physicals. Dr. Stephen Carr and Paula Parsons diligently examined the book’s colts to put together a list of superior individuals that allowed us to bid wisely. We landed an exciting quartet for our latest partnership:

The 2019 Cardinal, LLC is truly a remarkable opportunity to get involved with some of racing’s most exciting sires and coveted families. We can’t wait to watch them follow in the footsteps of G1 winners and millionaires like Wicked Strong and Preservationist, both graduates of the Keeneland September Sale. Get a closer look below and contact us anytime to learn more. 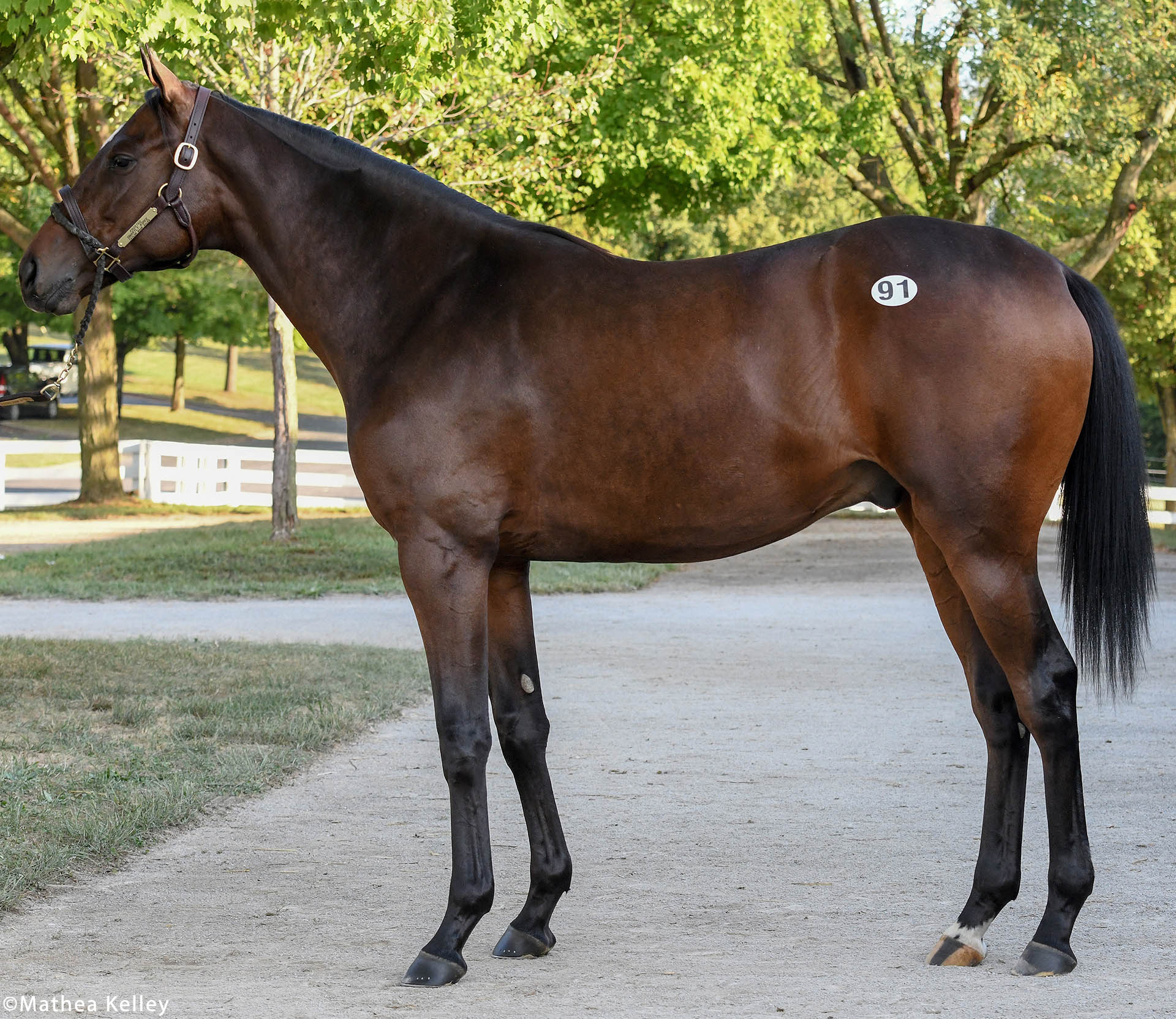 Of all the freshman yearling sires of 2019, none is more exciting than Frosted. The best son of record-breaking three-time Leading Sire Tapit, Frosted is a multiple grade one winner who scored an unforgettable victory in the Metropolitan Handicap (G1), romping by 14 1/4-lengths in a race-record time. His other triumphs included the Wood Memorial Stakes (G1), Whitney Stakes (G1), Pennsylvania Derby (G2) and Al Maktoum Challenge Round 2 (G2).

Centennial’s Frosted colt is out of Smartly Agree, a young mare who owns a classic pedigree. A daughter of Leading Sire Smart Strike – also the broodmare sire of Kentucky Derby (G1) victor Mine That Bird, and other grade one winners Dullahan, Shared Account, Union Strike, Strong Return, First Dude, and Peace and War – Smartly Agree earned her own black-type with a second to graded winner Dearest in the Azalea Stakes.

Taboo, the granddam of this colt, is by Forestry, a G1 winner and the broodmare sire of Kentucky Derby (G1) hero Nyquist. She is a three-quarters sister to three graded stakes winners, Creative Cause, Destin, and Vexatious. Creative Cause won the Norfolk Stakes (G1), Best Pal Stakes (G2), and San Felipe Stakes (G2), in addition to placing in races like the Preakness Stakes (G1), Santa Anita Derby (G1), Breeders’ Cup Juvenile (G1), and Del Mar Futurity (G1). Creative Cause is now standing at Airdrie Stud, where offspring like G1 winner Pavel placed him among the top five second and third-crop sires in 2017 and 2018, respectively. Destin took the Tampa Bay Derby (G2), in which he set a new track-record, the Marathon Stakes (G2), and Sam F. Davis Stakes (G3), and was beaten just a nose when second in the Belmont Stakes (G1). Vexatious is an earner of nearly $400,000 to date and earned a graded win in the Dowager Stakes (G3), as well as placing in four other graded events, twice on dirt and twice on turf.

The cross that produced this colt, that of Tapit and his sons with Smart Strike mares, has already produced stakes winners All Out Blitz and Power Jam. The broader cross of A.P. Indy-line stallions with Smart Strike mares is also responsible for grade one winner First Dude, and graded winners Deceptive Vision, Juanita, Moonlit Promise, Llanarmon, Sky Treasure, Look Strike, and Sir Anthony.

A Triple Crown winner who also captured the Breeders’ Cup Classic (G1), American Pharoah compiled a unique record as a runner. With his first crop being two-year-olds of 2019, American Pharoah has already sired 14 individual winners, including European group winner Maven, U.S. stakes winners Another Miracle and Four Wheel Drive, and group one placed Monarch of Egypt. This is a remarkable start by a horse who excelled over classic distances and has earned American Pharoah the top spot among freshman sires nationwide.

Centennial is delighted to offer an American Pharoah colt that is out of Spring Street, a mare that is a 100% winner producer, and who already has a current stakes winner to her name. Her first foal, Plentiful, has nine victories, including the listed Manitoba Derby. In addition to Plentiful, Spring Street is also the dam of both Menacing, a four-time winner, and Gizmo, a wide-margin maiden special weight winner at Fair Grounds. All three are in active training.

Spring Street is bred on an identical cross to grade one winner Seventh Street and graded winner Street Magician. Her dam, Spring Meadow, was a superior speedster who captured four black-type events, including the Las Flores Handicap (G3), and also took second in the La Brea Stakes (G1) and Prioress Stakes (G1), and third in the Test Stakes (G1). Spring Meadow is half-sister to stakes placed Its Mr Slew to You, and to Miss Rangoon, dam of graded winner Platinum Kingdom.

Spring Street’s granddam, Go for It Lady, was by Mr. Prospector and out of the stakes winning Northern Dancer mare, Ladyago, also the granddam of stakes winners Chestnut Lady and Our Lady Allie, and third dam of stakes winner Aithon. Ladyago’s own dam, Queen of Song, was also a fine runner, taking the Shuvee Handicap (G2), Sixty Sails Handicap (G3), and four other stakes events, and she was a sister to grade one winner and sire Cormorant.

Since its inauguration in 1984, only two horses have succeeded in completing the Breeders’ Cup Juvenile (G1)/Kentucky Derby (G1) double. The first has already established himself as one of the nation’s leading sires. The second, Nyquist – himself a son of Champion Two-Year-Old and record-breaking Champion Freshman Sire Uncle Mo – is represented by his first crop of yearlings in 2019. Centennial is extremely excited to have acquired this phenomenally well-bred Nyquist colt.

This colt is out of Tia, a mare who put together back-to-back wins at Aqueduct and Gulfstream Park in maiden special weight and allowance company respectively. With her first foal, she is the dam of Tejana, a three-time winner who fell just a neck short of a future G1 winner when second in the Monmouth Oaks (G3). By Champion racehorse, three-time Leading Sire, and outstanding broodmare sire, Giant’s Causeway, Tia is a sister to the Swaps Stakes (G2) victor Chief Havoc.

Tia’s dam is the beautifully-bred La Reina, winner of the Tempted Stakes (G3) at two, and also placed in a total of three other graded stakes on dirt and turf. By A.P. Indy out of Mr. Prospector’s Eclipse Award-winning daughter, Queena, La Reina is half-sister to Hollywood Derby (G1) captor Brahms, a horse who won or placed in nine graded stakes, five grade one, on both sides of the Atlantic and on both surfaces. She is also half-sister to stakes winner Olympic, and to the dam of stakes winner Anegada.

Too Chic, the dam of Queena, was also a grade one winner, and in addition to Queena and her sister, the Ashland Stakes (G1) scorer Chic Shirine, Too Chic is ancestress of nearly 30 stakes winners, 23 graded, including 11 grade one. That honor roll includes Keen Ice, conqueror of American Pharoah in the Travers Stakes (G1); Verrazano, who ran the highest Beyer Speed figure of his crop when recording a runaway victory in the Haskell Invitational Stakes (G1); and the 2019 Woodward Stakes (G1) hero, Centennial’s own Preservationist. It’s worth noting that multiple grade one winner Verrazano and his half-brother, El Padrino, himself a graded stakes winner, were both out of a Giant’s Causeway mare, thus making her a particularly close relative to the dam of the Nyquist colt.
Nyquist is out of a mare by a son of Storm Cat, and crossing a stallion back over a mare from his own sire line, as we have here, is often a profitable pattern. The cross of Nyquist’s sire, Uncle Mo, with Storm Cat-line mares has been very successful with eight stakes winners, including Nyquist, additional graded stakes winners Ultra Brat, Life’s a Parlay, and Auntie Joy, as well as Thrilled (out of a mare by Giant’s Causeway, as here) and Clipthecouponannie (out of a mare by Freud, a full brother to Giant’s Causeway). 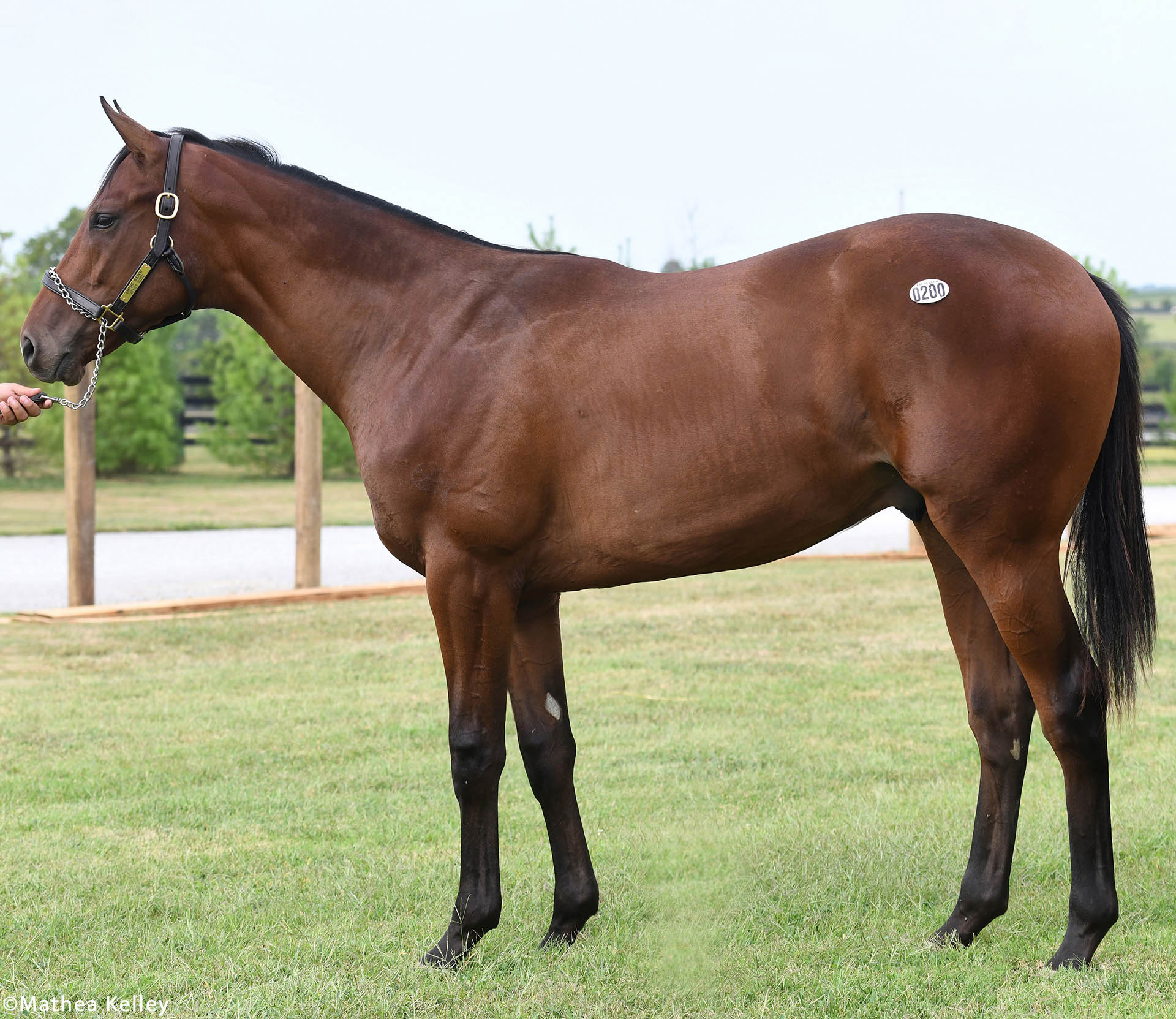 A classic winner who was undoubtedly the most talented three-year-old colt of his crop, Empire Maker has gone on to become an extremely influential sire. He is responsible for more than 60 stakes winners. Among them are 11 grade one winners, including Pioneerof the Nile (himself sire of Triple Crown winner American Pharoah); Bodemeister (sire of Kentucky Derby (G1) winner Always Dreaming); three-time Eclipse Award winner and Hall of Famer Royal Delta; Acoma, Emollient, Country Star, Grace Hall, and Mushka. He’s also sire of the exciting two-year-old Eight Rings in his current juvenile crop.

This Empire Maker colt is out of Zelda Rose, a half-sister to an exceptional performer in Wedding Toast, heroine of the Ogden Phipps Stakes (G1), Beldame Stakes (G1), Ruffian Stakes (G2), and Comely Stakes (G3).

Granddam Golden Sheba is a half-sister to a versatile superstar in Congaree. Earner of over $3,000,000, his victories included the Hollywood Gold Cup (G1), Swaps Stakes (G1), Carter Handicap (G1), two editions of the Cigar Mile (G1), and the Wood Memorial Stakes (G2). Golden Sheba is also half-sister to Sangaree, a stakes winner who placed in five graded stakes, including a second in the Triple Bend Handicap (G1), and Mari’s Thunder, the dam of stakes winner Storm Belt. Their dam, Mari’s Sheba, placed in the Santa Anita Oaks (G1).

This colt is bred on the cross of Empire Maker with a Storm Cat-line mare that has produced Bodemeister; grade one winner In Lingerie; graded winner Magical Feeling; graded winner Power Gal; and stakes winner Charm the Maker (out of a mare by Giant’s Causeway, the grandsire of the dam of this colt). In addition, Empire Maker’s late son, Pioneerof the Nile, was responsible for American Pharoah and fellow champion Classic Empire when bred to Storm Cat-line mares.

The total capitalization of this group is $2,350,000 with all expenses paid through December 2020.  We are eagerly awaiting the future of these stunning colts and can’t wait for you to join us on their journeys. All four colts have already arrived in Middleburg and have settled in well. This will allow them to take full advantage of the lucrative Virginia-Certified Residency Program. Please contact the office for more information or if you would like a hard copy brochure.