As the Triple Crown season is approaching, I wanted to reflect on one of its historic moments. In light of Colonial Affair’s death this week at the age of 23, my mind kicked into gear remembering that rainy Saturday in June 1993.

My father, Don Little, Sr., had no recollection of the weather stating “the sun is shining in the Big Apple” on ABC for the whole racing world to see. As the horses turned for home, I was watching in an area away from our hopeful and excited partners. I could not really see clearly through the fog but heard the call. I slowly advanced back to the owners’ box where people began to cheer “come on Julie!” They of course were cheering for Julie Krone, the female jockey aboard our entry Colonial Affair in the 1993 Belmont Stakes. Could this mark the first Triple Crown victory by a female jockey? The crowd was encouraging her down the stretch and our partners were cheering even louder. Eyes full of excitement and joy as he crossed the finish line in front of a field of 14.

History had been made on the 20th anniversary of Secretariat’s record 30 length victory. It has been almost twenty years since that great day. Most of the partners were new to horse ownership, something Centennial has always taken pride in. Many are still involved in some way to this day. A few things have changed since then as both trainer Scotty Schulhoffer and my father are no longer with us. The love of the sport and the thoroughbred continues on with the Centennial Farms’ family. Thanks to all our partners especially Betty Moran and Fred Martin, Colonial Affair’s groom Vicente Zapien, Scotty’s assistant Sal Russo, Dr. Stephen Carr, Paula Parsons and most of all to Julie Krone who made the dreams of many become a reality.

They say things come in threes, the number three that is. It was a Triple Crown race in 1993. It is Centennial’s thirtieth anniversary so maybe that dream once again will become reality with the new crop of Centennial two year olds in 2013. May our partners, current and new, once again experience the feeling we all had on that rainy Saturday in June.

Who knows, maybe my father and Scotty are watching him breeze right now. 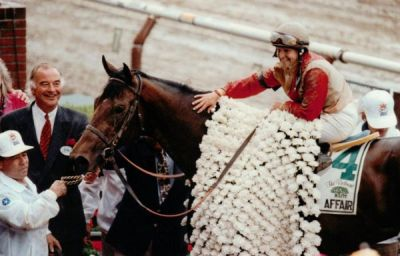