As the Triple Crown season is approaching, I wanted to reflect on one of its historic moments. In light of Colonial Affair’s death this week at the age of 23, my mind kicked into gear remembering that rainy Saturday in June 1993.

My father, Don Little, Sr., had no recollection of the weather stating “the sun is shining in the Big Apple” on ABC for the whole racing world to see. As the horses turned for home, I was watching in an area away from our hopeful and excited partners. I could not really see clearly through the fog but heard the call. I slowly advanced back to the owners’ box where people began to cheer “come on Julie!” They of course were cheering for Julie Krone, the female jockey aboard our entry Colonial Affair in the 1993 Belmont Stakes. Could this mark the first Triple Crown victory by a female jockey? The crowd was encouraging her down the stretch and our partners were cheering even louder. Eyes full of excitement and joy as he crossed the finish line in front of a field of 14.

History had been made on the 20th anniversary of Secretariat’s record 30 length victory. It has been almost twenty years since that great day. Most of the partners were new to horse ownership, something Centennial has always taken pride in. Many are still involved in some way to this day. A few things have changed since then as both trainer Scotty Schulhoffer and my father are no longer with us. The love of the sport and the thoroughbred continues on with the Centennial Farms’ family. Thanks to all our partners especially Betty Moran and Fred Martin, Colonial Affair’s groom Vicente Zapien, Scotty’s assistant Sal Russo, Dr. Stephen Carr, Paula Parsons and most of all to Julie Krone who made the dreams of many become a reality.

They say things come in threes, the number three that is. It was a Triple Crown race in 1993. It is Centennial’s thirtieth anniversary so maybe that dream once again will become reality with the new crop of Centennial two year olds in 2013. May our partners, current and new, once again experience the feeling we all had on that rainy Saturday in June.

Who knows, maybe my father and Scotty are watching him breeze right now.

Belmont Stakes (gr. I) winner Colonial Affair died on the morning of April 23 at Haras El Paraiso in the Buenos Aires province of Argentina.

The 23-year-old son of Pleasant Colony—Snuggle, by Nijinsky II, was shipped to Haras El Paraiso in 2003. He was previously retired from stallion duty.

Owners Pablo and Victoria Duggan reported in an e-mail message that Colonial Affair was found dead in his paddock, possibly of a heart attack or some other infirmity of old age. The owners said the stallion would be buried at their horse cemetery.

“It was a honor for us to be able to stand such a good horse at our farm,” they wrote.

Colonial Affair helped Julie Krone make history in 1993 by becoming the first female jockey to win the Belmont Stakes (gr. I) and first to win any of the Triple Crown races. He won three other graded stakes—the Jockey Club Gold Cup (gr. I), Whitney Handicap (gr. I), and the Excelsior Handicap (gr. II)—all in 1994.

Out of 20 career starts, Colonial Affair won seven times and placed in another seven races. His career earnings totaled $1,635,228.

He has sired 15 U.S. stakes winners and 20 worldwide, including the Argentine group I winner Cafrune, who was bred by El Paraiso and has won 15 stakes to date. 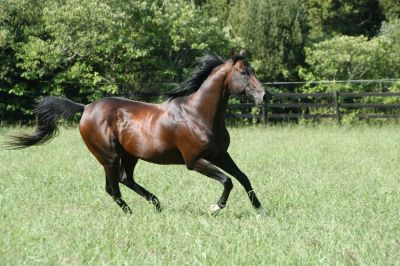 With no Virginia-bred headed to Louisville for the Kentucky Derby, recently departed Colonial Affair will remain the most recent state-bred to win a Triple Crown race.

Twenty years ago, Colonial Affair provided a landmark win with major impacts, one immediately apparent after the Belmont Stakes and one that would go unrecognized for years to come.

Colonial Affair died in his stall apparently of natural causes on April 23. The 23-year old had been retired from stallion duties in Argentina, where he stood for about a decade.

In delivering the wide sweeping Belmont Stakes win, Julie Krone became the first female jockey to win a Triple Crown Race — a milestone win that crossed over into mainstream media.

Colonial Affair was bred by Herman Greenberg’s Rutledge Farm in Middleburg, sired by a Virginia stallion that won the Kentucky Derby in 1981, Pleasant Colony. He was out of the winless Nijinsky II mare Snuggle.

“(Colonial Affair) was a big, scopy horse that could cover distances in an effortless motion,” recalls winning owner Don Little of Centennial Farms. “He kicked it up a notch when the tack was put on him. Otherwise he was lying down.”

“He was a big, quiet horse that was easy to ride,” confirmed Parsons. “Certainly not obnoxious as colts can be at that age.”

Centennial picked up Colonial Affair at the 1991 Saratoga yearling sale for $100,000, a deal if you could see potential.

“Funny thing about Pleasant Colony was that he was one of the least impressive horses to look at while Colonial Affair was good looking,” said Little. “He must have got it from his mother (Snuggle). But we knew Pleasant Colony was a sire of horses that would get the distance. He was a big lanky colt but you could look past that and picture what he would look like as a grownup.”

Little passed on the Derby and Preakness, despite the obvious allure, to have Colonial Affair at his best in the Belmont Stakes.

“Belmont was the target,” explains Little. “We didn’t pay any attention to the Derby or the Preakness. Our focus was to win a classic distance type of race.”

After Krone’s determined ride in the middle of the Belmont stretch, it may not have figured that Colonial Affair would be the last Virginia-bred to stroll into a Triple Crown winner’s circle.

His victory came during a renaissance of Virginia racing, a golden age. Hansel won the Preakness in 1991. In the Belmont starting gate with Colonial Affair was Paul Mellon’s Sea Hero, the reigning Kentucky Derby winner.

The impact of this mini-golden age was a huge asset in bringing in-state racing to life in Virginia. In October of that same year, the Virginia Racing Commission set a deadline for track construction applications. New applicants were interested thanks to the passing of simulcast wagering legislation earlier in the year in the General Assembly. A little over a year after Colonial Affair’s Belmont, the Virginia Racing Commission awarded an unlimited license to Stansley Racing.

It would have been ideal for Virginia breeders if the state had had racing during the early Nineties. Capitalizing on those on-track successes might have led to changes that would still be apparent. The number of Virginia-bred registered foals increased briefly in 1994 and then again when Colonial Downs finally opened. Currently however, it’s a little over a third of what is was in 1993.

“We never had a program to reward breeders,” observed Parsons. “It’s hard to know how much a lack of the program hurt us because we were successful despite not having one.”

Yet despite a diminishing foal crop, Virginia-breds continue to produce quality if not quantity, results. Quality Road and Bodemeister have launched legitimate campaigns in recent year looking to hang a Triple Crown blanket on a Virginia-bred label. Quality Road would have been the favorite in the Kentucky Derby in 2010 if not for a quarter-crack. Last year, if not for I’ll Have Another, Bodemeister, first runner up in the Derby and Preakness might have made a Triple Crown bid in the Belmont stakes.

Within the last month Swagger Jack became Virginia’s latest Grade one winner in the $400,000 Carter Handicap.

As for this year’s class, Code West is the best chance for a Virginia-bred to make a Triple Crown starting gate, probably in the Belmont Stakes.

Julie Krone, meanwhile, remains the only female jockey to win a Triple Crown race. Rosie Napravnik will attempt to add to that list when she rides Mylute in Saturday’s Kentucky Derby.

As the focus of thoroughbred racing shifts to the upcoming Belmont Stakes, Centennial Farms would like to take a look back at one of our finest moments: Colonial Affair’s upset victory in the 1993 Belmont Stakes with jockey Julie Krone.

In front of more than 45,000 fans on a rainy and damp summer day, Colonial Affair benefited from a flawless ride by Krone to become the first classic winner for Centennial Farms. It was also the first and only victory by a female jockey in a Triple Crown race.

Colonial Affair had finished second in the Peter Pan Stakes two weeks earlier, but both Krone and Hall of Fame trainer Scotty Schulhofer agreed that the colt was asked for too much run early in that race. A plan was hatched to get an optimum performance from the son of Pleasant Colony: take him farther back off, keep him out of the kickback from other horses, and come with one strong run.

The victory remains one of the most memorable for Centennial Farms, and it ranks as #55 in the Blood Horse Publications book “Horse racing’s top 100 moments”.

All said, Colonial Affair will be remembered as one of the better horses of his generation. He won both the Whitney and Jockey Club Gold Cup as a four-year-old in 1994 before getting injured on the eve of the Breeders’ Cup Classic, where he would have been favored in the richest race in the world.

The horse has traveled the world as a stallion, standing in the United States before seasons in New Zealand, Japan, and his current home of Argentina.

The victory also catapulted Julie Krone into iconic status . In 2000, she became the first woman inducted in the National Museum of Racing and Hall of Fame. 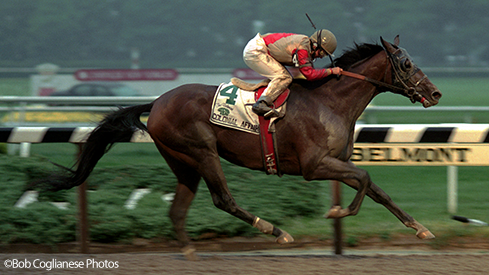