Grade 1 winner and millionaire Preservationist has retired to Airdrie Stud in Midway, Kentucky. His sparkling pedigree, desirable conformation, and world-class talent make him a thoroughly exciting stallion prospect. Centennial Farms has placed over fifteen stallions at some of the most prestigious farms in the world. We are endlessly grateful to his partners, Paula Parsons and the Middleburg team, Jimmy Jerkens and his entire staff (including Preservationist’s longtime groom Junior McFarlane), Dr. Carr, and everyone else who had a hand in fostering this remarkable horse. We can’t wait to watch Preservationist develop in to one of the nation’s leading sires!

Preservationist is back in action in the mornings after his G1 victory in the Woodward Stakes on August 31. 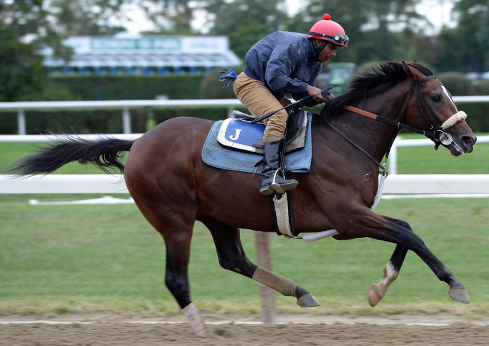 Heart, class, talent, guts. A horse like this is the kind you dream of each day in this sport.

Expertise, loyalty, patience. People like these are the kind you work to surround yourself with.

Pure joy. Moments like this are what happens when it all comes together.

Preservationist put forth a phenomenal effort to become a Grade 1 winner, forcing his way through traffic to take the prestigious Woodward at Saratoga Race Course. The six-year-old’s success at the highest level is the result of considerable horsemanship by the team in Middleburg and the Jimmy Jerkens barn coupled with patience by his partners, who understood the value of putting the horse first. Expertly piloted by Junior Alvardo, Preservationist confirmed his standing as one of the nation’s top older horses with a victory over a field that included the race’s defending champ and two subsequent G1 winners.

A mini rainbow appears as the Saratoga crowd applauds for a big performance from @Centennial_Farm’s Preservationist! What a race #Woodward @NYRABets pic.twitter.com/ZbF1QjZDUb

That was a wing-ding of a Woodward at Saratoga. Nice to see the patience of @J_JerkensRacing rewarded with first G1 win for Preservationist, 6yo horse by Arch. Gutsy ride by @Juniorjockey and congrats to Don Little and the @Centennial_Farm partners. Longshot Bal Harbour second.
— Ray Paulick (@raypaulick) August 31, 2019

Great win for @J_JerkensRacing and @Centennial_Farm as @Juniorjockey gives Preservationist a sensational ride to win the Woodward. Congrats all around
— Andy Serling (@andyserling) August 31, 2019

Was sitting in front of the Preservationist contingent for the Woodward (gratuitous seat location drop), but in all seriousness, they had at least 6 boxes, and the screams they let out went further than dollars and cents. Real cool. @Centennial_Farm @J_JerkensRacing @Juniorjockey
— Kevin Cox (@brooklyncowboy1) September 1, 2019

So happy to see all the attention and love given to Preservationist, @Centennial_Farm and @J_JerkensRacing for yesterday. Their accomplishments stand on their own, but I like to think I had a hand in increasing their fanbase over the years.

Preservationist’s win in the Woodward Stakes is our @SentientJet Perfect Trip of the Week! Take a look back at yesterday’s performance. pic.twitter.com/p4IHLX6KZa

That was one helluva ride by @Juniorjockey on Preservationist and a great training job by @J_JerkensRacing winning the Woodward for top stable @Centennial_Farm. Very brave performance muscling his way between horses in deep stretch. That’s what racing is all about!

Preservationist does it! Congrats to @Centennial_Farm, @Juniorjockey and Jimmy Jerkens for their spectacular score in the Woodward Stakes @TheNYRA. pic.twitter.com/0Cz95PhYgI

Preservationist, ridden by @Juniorjockey and trained by Jimmy Jerkens, wins the 66th running of the Woodward Grade I Stakes #SaratogaRaceCourse #Saratoga @Centennial_Farm pic.twitter.com/jn4CAvNxcw

Sometimes there are no words – just gratitude and awe. Preservationist’s stakes debut as a long time coming, and he didn’t disappoint. Preservationist blew the doors off of a talented field, including G1 winners Catholic Boy and Pavel, in the G2 Suburban. Everything about the performance was sublime, including the authoritative margin of victory (4 1/2-lengths) and sparkling final time (1:59.99). The performance, beneath regular rider Junior Alvarado, instantly stamped him as one of the nation’s best older horses. We couldn’t be more grateful to the phenomenal horsemen and women, headed by Jimmy Jerkens, Paula Parsons, and Dr. Carr, who have developed Preservationist, and the partners who let it happen. Read more:

Surely in some language the name “Jerkens” translates to “patience.” 6yo career top (and what a top it was) from Preservationist.

Preservationist finally delivers on that limitless potential and rewards @J_JerkensRacing‘s and @Centennial_Farm‘s patience. That was a beautiful ride by @juniorjockey who didn’t panic when Catholic Boy make that early move. 1 1/4 miles in 1:59 4/5 is pretty impressive.

Nice to see the patience that @J_JerkensRacing and @Centennial_Farm displayed with Preservationist pay off in a Suburban (how is this not a G1) Stakes. Nice ride by @Juniorjockey as well.

Unraced since February. Tough group. Rail draw. Slop. No problem. Preservationist rallied up the rail and powered home to an impressive 1 1/2-length score at Belmont Park. It is endlessly gratifying to see this talented horse display the talent we have long believed he had. Everyone at Centennial Farms is grateful to have such incredible partners who have been happy to let him develop at his own rate and world-class horsemen and women orchestrating that possibility.

Six-year-old Preservationist, making his second start following an eleventh-month layoff, rewarded the faith of his patient team with a thrilling victory at Aqueduct! Everyone at Centennial Farms is grateful to have phenomenal partners who understand the value of waiting in order to get Preservationist back to the races. Paula Parsons and her team have done their usual outstanding work during his visits to Middleburg, allowing Jimmy Jerkens and the New York-based crew to capitalize. Here’s hoping he continues to deliver!

The victory by Preservationist also marked Centennial’s fourth of the young year… from just eight starts! Two other on-the-board performances have our top three percentage sitting at 75%.

What a way to kick off the new year! Mihos proved his status as a Thoroughbred Daily News “Rising Star” was on the money, digging in to prevail in his stakes debut. BloodHorse and TDN have more on the thrilling victory.

Mihos’s victory was one of two races to kick off the new year for our team and partners. The patient partners behind Preservationist welcomed their promising horse back to the races at Aqueduct. The talented six-year-old finish third to a stakes winner, sprinting in the slop, making his first start in eleven months.

Preservationist could not have been more impressive at The Big A! The ultra-talented five-year-old delivered a massive performance, rolling to a four-length score. He earned a gaudy 97 Beyer speed figure for his effort, his second straight victory and our third win in four 2018 starts. 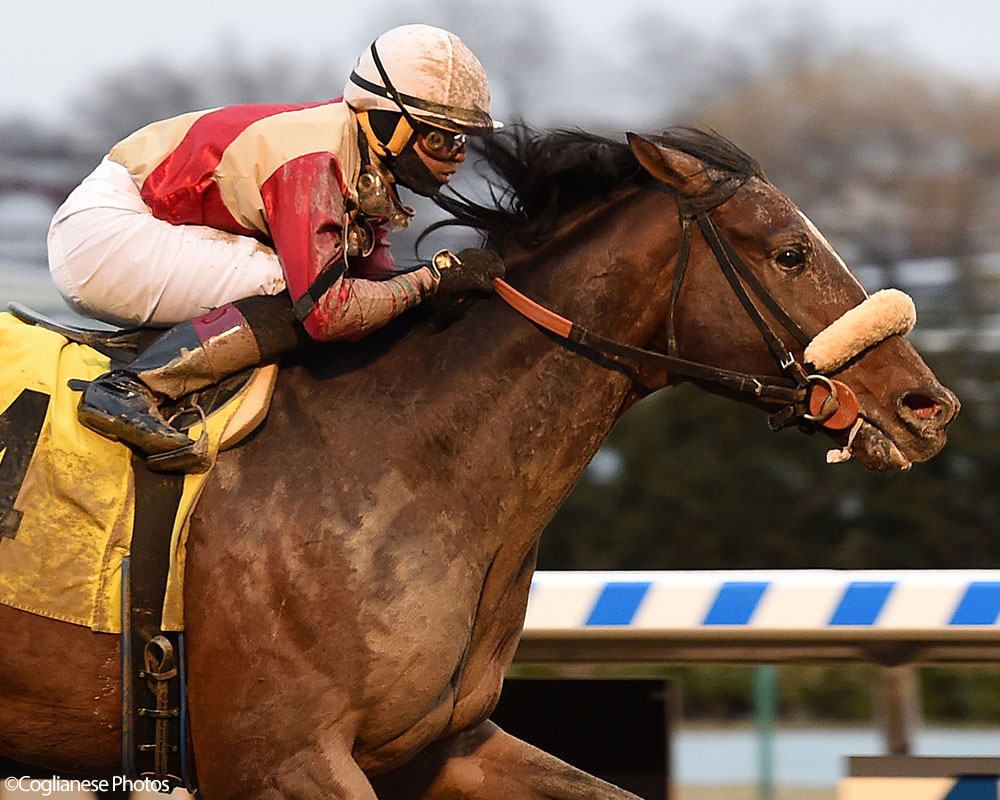 That’s how you start a year! Preservationist, the first starter for Centennial Farms in the new year, delivered a game performance to break his maiden at Aqueduct Racetrack. The five-year-old’s talent has always been abundant, and patient handling by Jimmy Jerkens, Paula Parsons, and Dr. Carr have allowed it to shine. 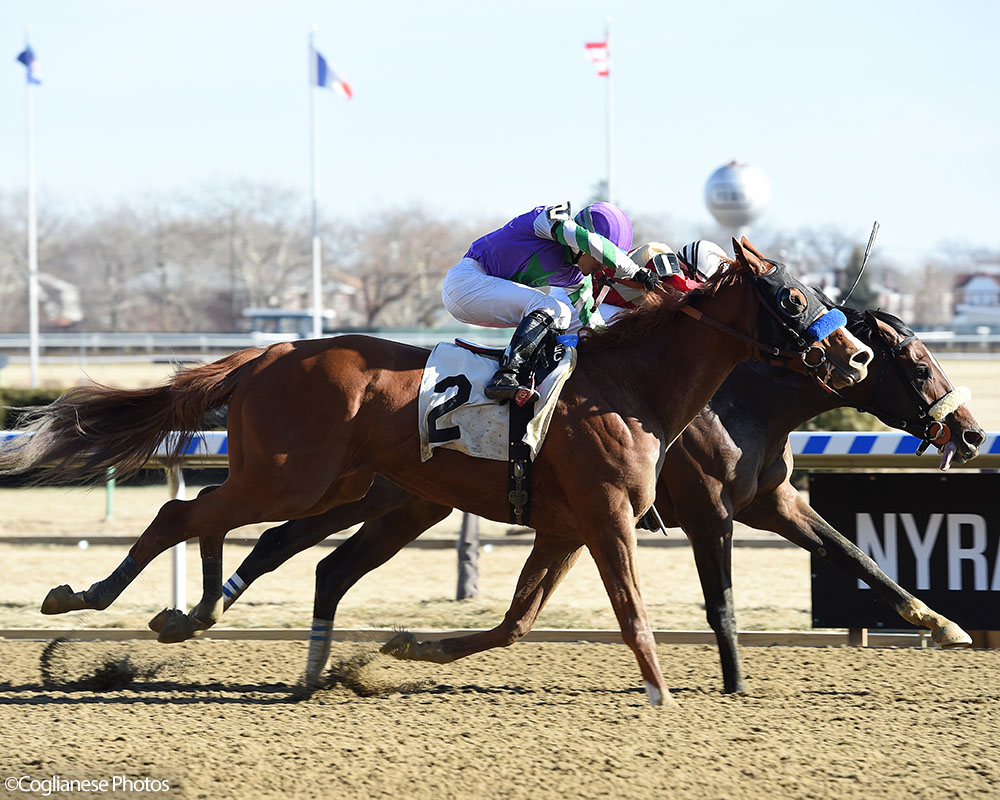 On-track victories aren’t the only way to win in thoroughbred racing. We sent forth a trio of horses in the Belmont Stakes Racing Festival and although none won, everyone who attended had a phenomenal time.

Debuting Preservationist got the ball rolling, as his first race kicked off the Friday card at Belmont Park. The big colt finished a closing second to the more experienced Bombs Away, who was making his second career start. Preservationist’s massive gallop-out drew quite a bit of attention from those watching.

Runner-up Preservationist is a runner as well. We will be hearing good things from both of the first two finishers going forward.

@Centennial_Farm Exceptional Debut for Preservationist. Sky’s the limit. Looks like a classic type. Still the next coming !

The form of highly regarded Bombs Away would go on to be further franked. Connect, another touted three-year-old who had defeated Bombs Away in their respective debuts, was an impressive allowance winner on the Belmont Stakes card.

Later on Friday, Adulator made his first start since breaking his maiden at Aqueduct Racetrack in the spring. Unfortunately, the handsome bay stumbled repeatedly exiting the starting gate. While many horses would throw in the towel after such an inauspicious beginning, Adulator demonstrated quite a bit of heart, and ability, to rejoin contention before flattening out to fourth.

Our final starter of the prestigious week’s racing was Securitiz, who made his graded stakes debut in the G2 Brooklyn. A disadvantageous draw in the far outside post meant plenty of lost ground. In fact, Trakus data shows he covered more distance than all but one other horse in the field at a whopping 57 feet more than the winner. Despite that, the big step up on class, and the fairly quick turnaround, Securitiz put up a big performance. He missed second by less than 1 3/4 lengths while finishing fifth to his champion stablemate, the runaway winner Shaman Ghost.

Three big on-track efforts left us plenty to be proud of as we enjoyed one of the year’s biggest cards of racing. Based out of the exquisite Champagne Room, which offered exclusive access to the Clubhouse apron, family, friends, and partners came together to watch a world-class day. Check out some of the scenes of the day and get in touch if you want to make sure you’re there for the next go-around!