The Keeneland September Yearling Sale is the year’s biggest showcase of elite yearlings. Bidders from around the world assemble to identify and acquire their next stars. The Centennial Farms acquisition team, which has purchased standouts like Preservationist, Rocketry, and Wicked Strong from this sale in recent years, worked diligently to add elite colts to the roster. These four yearlings possess pedigrees that mark them as potential stallion prospects coupled with the physical attributes required of superior athletes. The new additions are:

WAITLIST
NOT THIS TIME – GRANDEZZA by SCAT DADDY 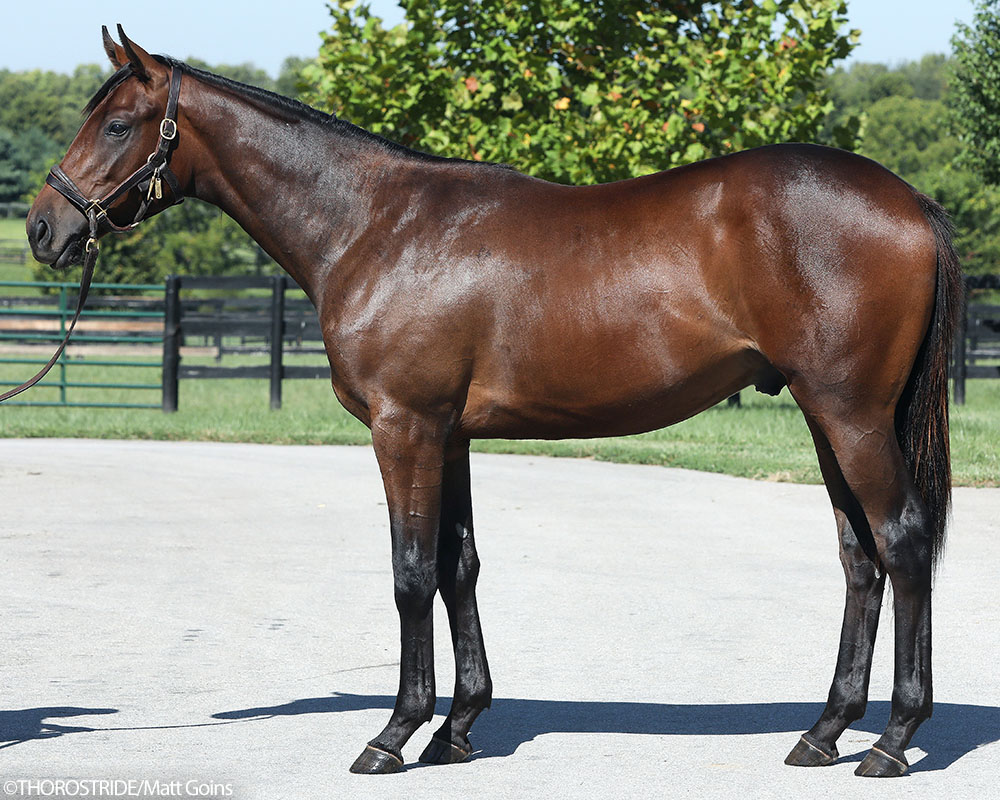 There are few hotter stallions than Not This Time and Centennial’s Not This Time colt is the first foal out of a winning Scat Daddy mare.

Not This Time stamped himself as an elite talent during his lone season of racing. His romp in the Iroquois Stakes (G3) by 8¾-lengths made him the favorite in the Breeders’ Cup Juvenile (G1), where he was beaten just a neck by Champion Classic Empire.

A son a three-time Leading Sire Giant’s Causeway, Not This Time has made an impressive start to his stud career. With his oldest runners only four, he is already represented by 21 stakes winners, including leading Eclipse Award candidate Epicenter, winner of the Travers Stakes (G1), Louisiana Derby (G2), Jim Dandy Stakes (G2) and Risen Stakes (G2), and second in the Kentucky Derby (G1) and Preakness Stakes (G1). He is also the sire of grade one winners Just One Time and Princess Noor, and additional graded stakes winners Simplification, Arzak, Yes This Time, Midnight Stroll, and Easy Time. Not This Time was the leading second crop sire of 2021 and currently ranks as the nation’s leading third crop sire.

This colt is the first foal out of Grandezza, a Scat Daddy mare who took a ten-horse Churchill Downs maiden special weight by 3½-lengths and earned better than $130,000. The late Scat Daddy was a prolific sire whose daughters are responsible for Champion Whitmore, among others.

The second dam, Tap Mate, is a sister to the prolific Tap Day, who won six stakes including the Meadowlands Breeders’ Cup Stakes (G2), and placed in the Suburban Handicap (G1). Tap Mate is also a half-sister to Street Mate, the dam of active stakes winner Bell’s the One, a winner of over $2,000,000 to date, including the Churchill Downs Distaff Stakes (G1) and four other graded stakes.

Grandezza’s second dam, Day Mate, is a winning half-sister to multiple graded stakes winner Fairy Garden and stakes winner King’s Mate. Day Mate’s dam, Possible Mate, was a four-time graded stakes winner who was among the best older mares of her generation. She is out of the noted foundation mare Execution, ancestress of more than 38 stakes winners, 18 graded, including other grade one winners Prenup, Yonaguska, and Dream Empress. This is a family that was developed by Edward P. Evans, who also developed the families responsible for leading sires Quality Road and Gun Runner.

It’s worth noting that Not This Time is a grandson of Storm Cat and that he has already sired four stakes winners, including the grade one winning Just One Time, with inbreeding to Storm Cat, a factor present in the pedigree of this colt. 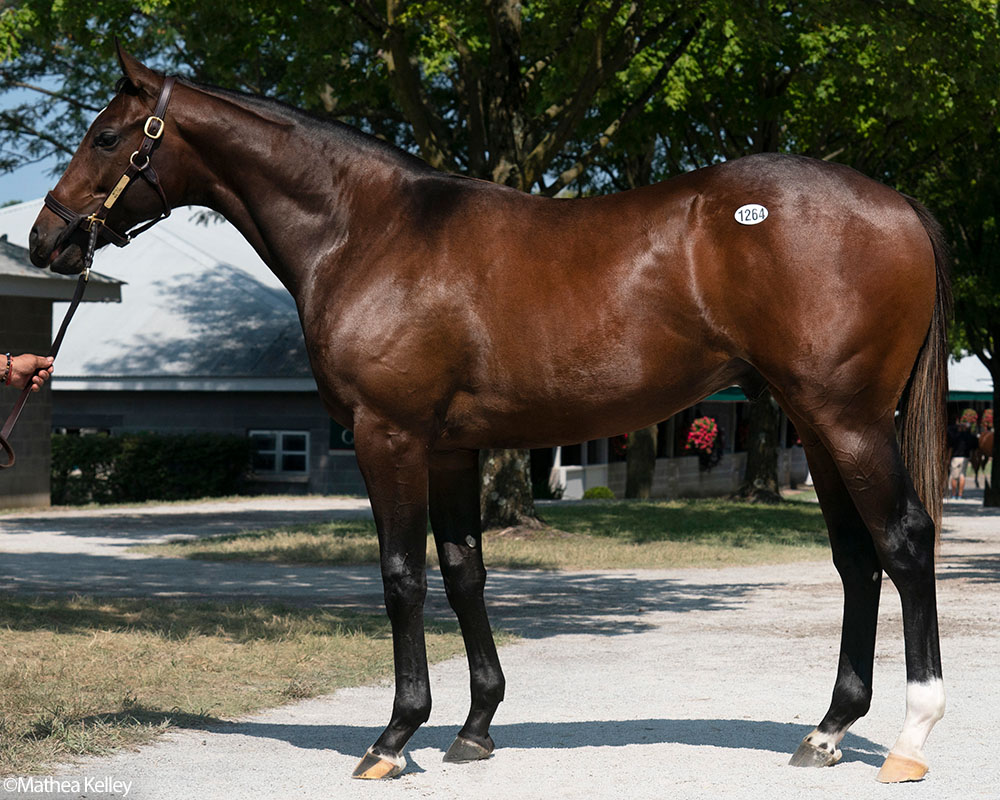 From the first crop of sensational sprint champion Mitole comes this colt out of a winner producing Candy Ride mare who is half-sister to a graded stakes winner from Mitole’s immediate sire line.

This son of Mitole is out of Waltzing. Dam of a winner from just two foals to race, Waltzing is a three-quarters sister to stakes placed Stride, and a half-sister to both the Boiling Springs Stakes (G3) and Little Silver Stakes winner Dancing Solo, and to grade one placed Dancing. Note that Dancing Solo is a daughter of Giant’s Causeway, the grandsire of Mitole. Waltzing is by terrific broodmare sire Candy Ride, whose daughters are responsible for G1 winners like Epicenter and Search Results.

This colt is a product of the fast-emerging Giant’s Causeway/Candy Ride cross which has already produced four stakes winners, including Travers Stakes (G1) winner and 2022 Eclipse Award candidate Epicenter, and the 2022 grade two winner Simplification. 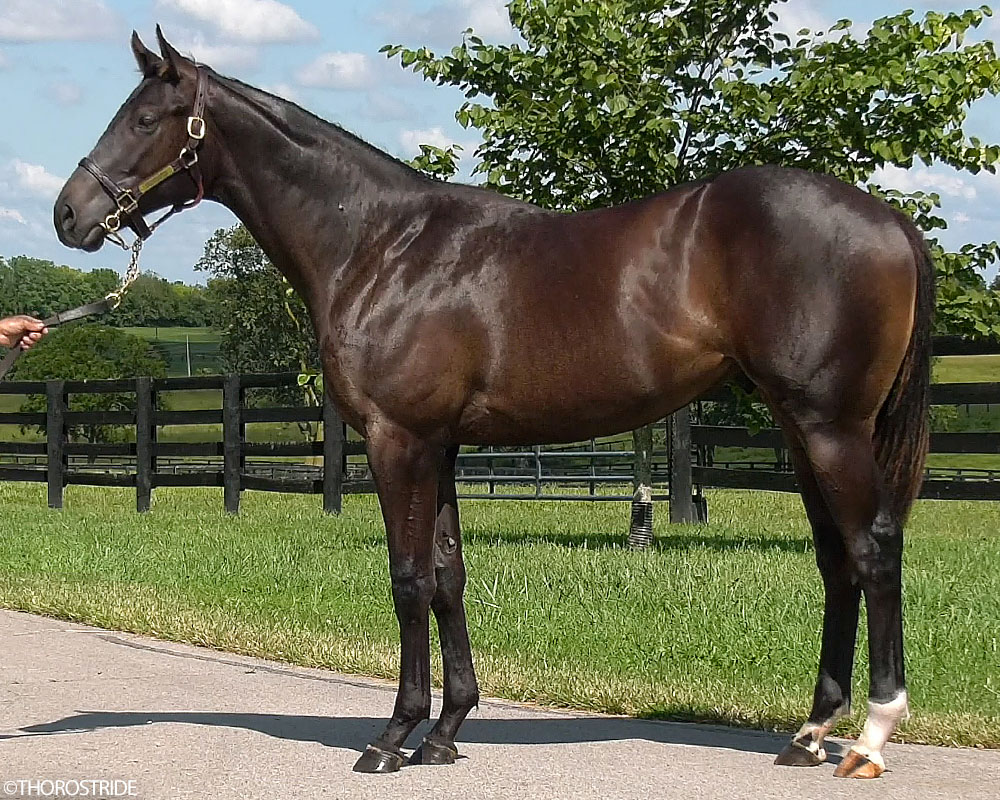 By the brilliant City of Light – a leading freshman sire of 2022 – this colt is out of the young, speedy multiple stakes winning mare I Still Miss You.

City of Light was a simply spectacular and versatile racehorse. Winner of the Malibu Stakes (G1) sprinting at three, at four he took the Breeders’ Cup Dirt Mile (G1), Triple Bend Stakes (G1), and Oaklawn Handicap (G2), before ending his career by defeating a field that included Champion Older Horse Accelerate in the Pegasus World Cup Invitational (G1) going 1 1/8-miles at five. With his first crop, City of Light is already sire of stakes winners Chop Chop and Sendero, and Battle of Normandy, who came within a neck of taking the With Anticipation Stakes (G3).

This colt is the second foal from the speedy and precocious I Still Miss You. Winner of the Astoria Stakes and Key Cents Stakes, and second in the Lynbrook Stakes at two, I Still Miss You trained on to win two allowance races and the Arctic Queen Stakes at three.

I Still Miss You is a three-quarters sister to stakes winner A Life That’s Good. Their dam, Lion’s Terms, earned $235,000 and is a sister to both Maddy’s Lion, winner of the Jimmy Winkfield Stakes and Mr. Prospector Stakes, and Maddy’s Heart, who took the Maryland Million Ladies Stakes. She is also a half-sister to Maryland Million Distaff Handicap winner Maddy’s Dance, herself the dam of stakes placed Maddy’s Last Dance. 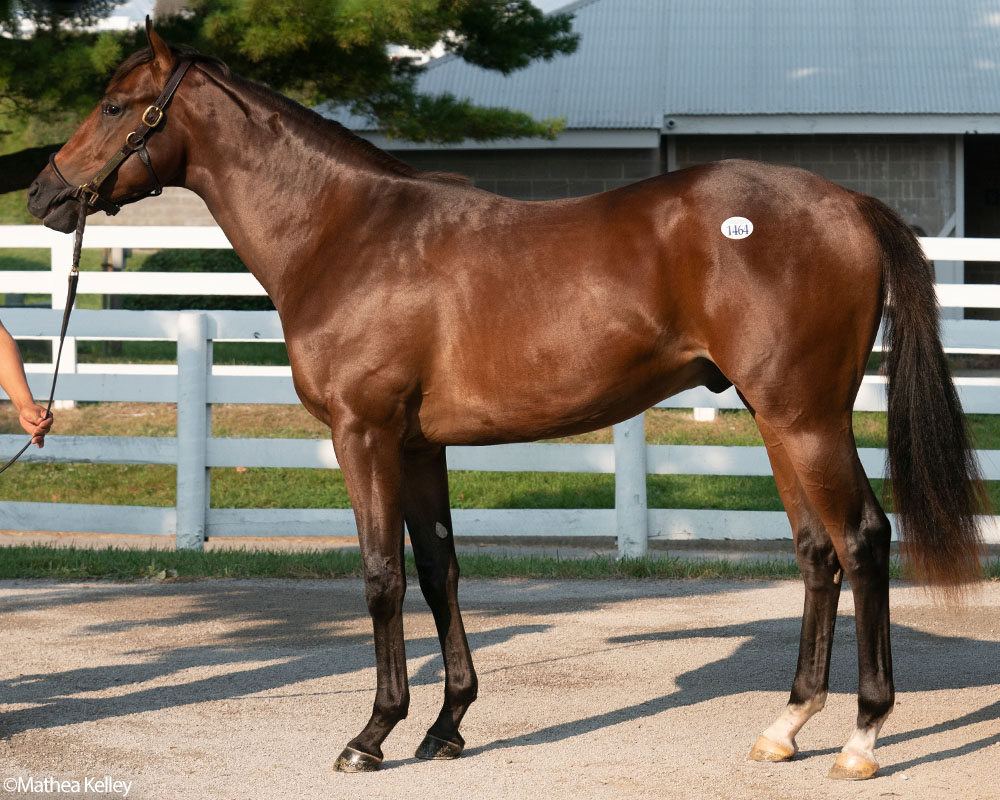 Champion Two-Year-Old Male Good Magic is off to a great start with his first crop of juveniles in 2022. Here we have a Good Magic colt whose dam is a winner producer by Medaglia d’Oro out of a multiple grade one winning mare.

The dam, Joyeria, is already responsible for a winner with her first foal, Fasted. She is by Medaglia d’Oro, the sire of such legendary performers as Rachel Alexandra and Songbird, and already the broodmare sire of grade one winners Olympiad, Rock Fall, Santin, Competitionofideas, and Rachel’s Valentina.

Joyeria, who is a half-sister to stakes placed Bernadiva, is out of the highly gifted Evening Jewel. A grade one performer on dirt, turf, and synthetic, Evening Jewel captured the Ashland Stakes (G1), Del Mar Oaks (G1), San Clemente Stakes (G2), and Honeymoon Handicap (G1) while also finishing second in the Kentucky Oaks (G1) and third in the Breeders’ Cup Filly & Mare Sprint (G1).

Good Magic’s leading runner to date, Champagne victor and Breeders’ Cup Juvenile-bound Blazing Sevens, is out of a daughter of Warrior’s Reward, a son of Medaglia d’Oro and thus bred along the same cross as this colt.

At this time, our minimum subscription amount is 2.5% ($56,875) with a total capitalization of $2,275,000.  That accounts for all of their expenses through the conclusion of 2023 and includes contributions to our Equine Retirement Fund. All four colts have already arrived in Middleburg, where they will be made eligible for the lucrative Virginia Residency Program. Please contact the office for more information or if you would like a hard copy brochure.